A once in a lifetime event happened on Friday, May 8, 2015, in the skies over Washington, DC. World War II vintage warbirds assembled in 15 groups to honor the 70th anniversary of Victory in Europe (VE) Day as they flew over the National Mall. The formations represented the major battles of WWII. I took the day off to experience the Arsenal of Democracy Flyover and to be able to share some aircraft photos with you from my location near the WWII Memorial. 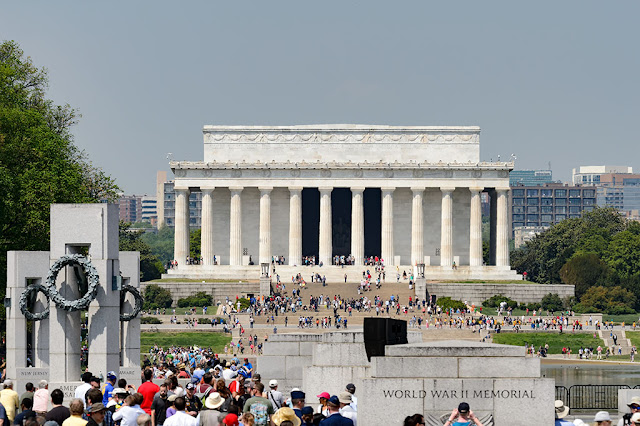 The first group up were the trainers and liaison aircraft. Flying slow and in formation were the Piper L-4 Grasshoppers. 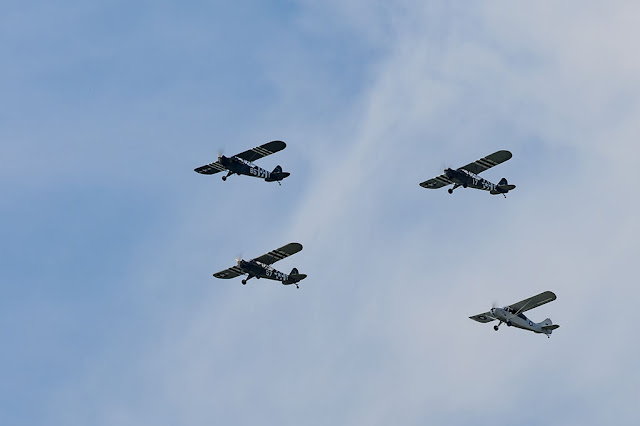 They were followed by what would be the largest formations of the event. The first set of trainers started with the iconic Boeing PT-17 Kaydets. These "Stearman" aircraft with their bi-plane configuration made an excellent platform for teaching new pilots during the war. 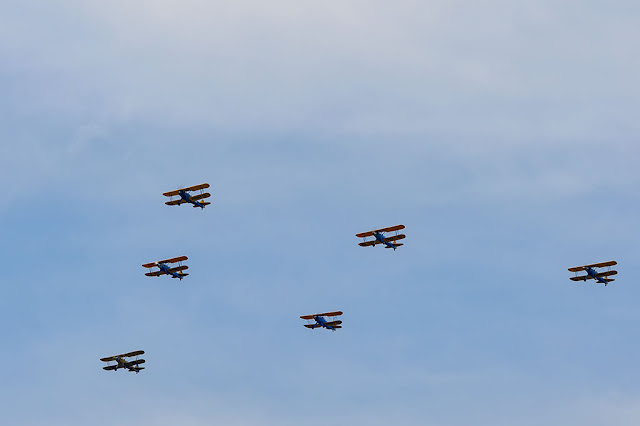 As pilots progressed in their training they would eventually train in a North American AT-6 Texan. The Texan's radial engines vibrated down the streets of the Nation's Capital. 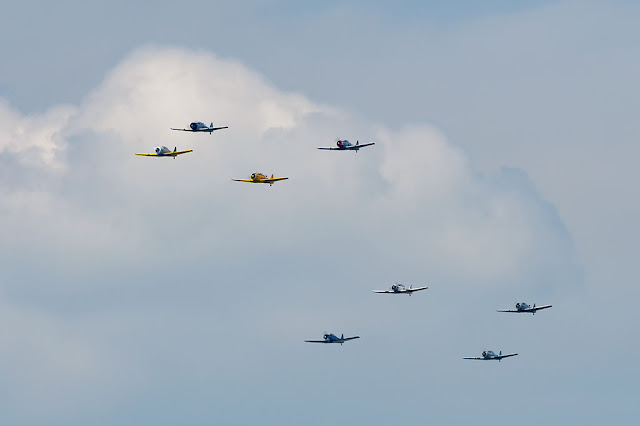 The last trainer in the group was a Beech AT-11 Kansan. This aircraft was often used to train the crews of the larger aircraft like bombers. 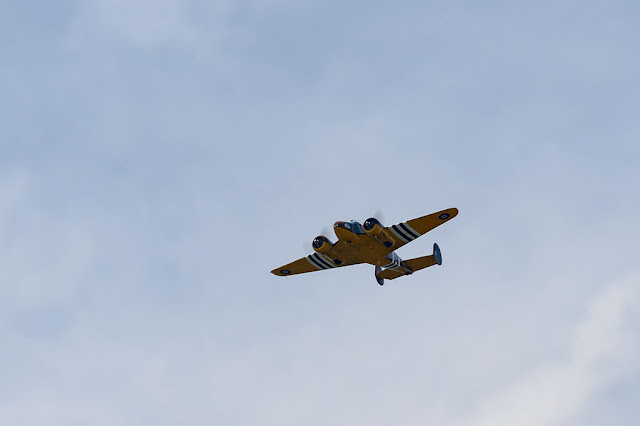 The next grouping of warbirds represented Pearl Harbor. Two Curtiss P-40 Warhawks flew over the Mall in their Flying Tigers war paint. 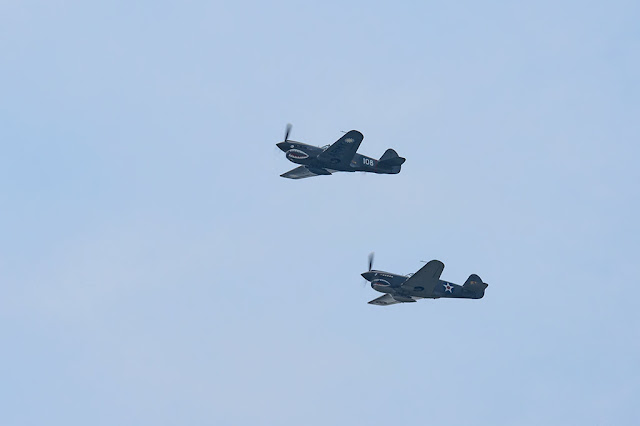 To represent the Doolittle Raid, two North American B-25 Mitchell bombers and a North American PBJ-1 Mitchell took part in the flyover. The B-25 bombers were "Betty's Dream" and "Paper Doll" while the PBJ-1 was "Devil Dog". 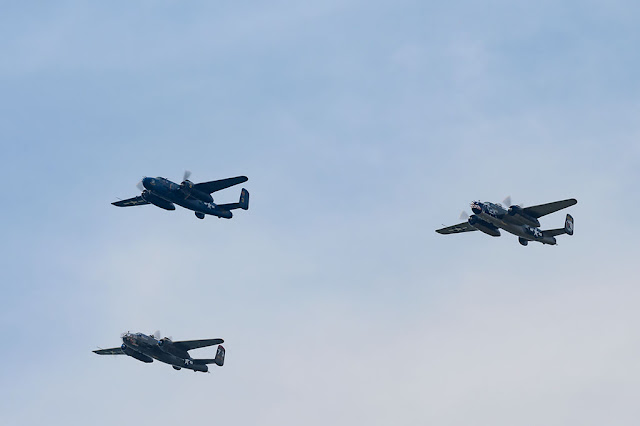 The turning point for the War in the Pacific was the Battle of Midway. Planes representing this battle included a beautiful Consolidated PBY Catalina Navy patrol bomber amphib/flying boat. Joining her were the ship-based fighter Eastern Aircraft Division FM-2 Wildcat and a Douglas SBD Dauntless divebomber. 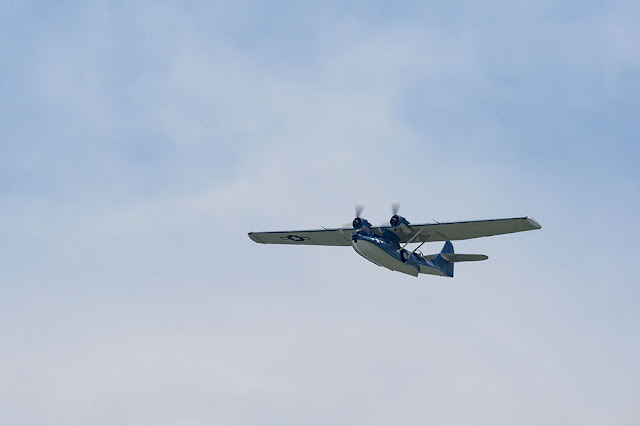 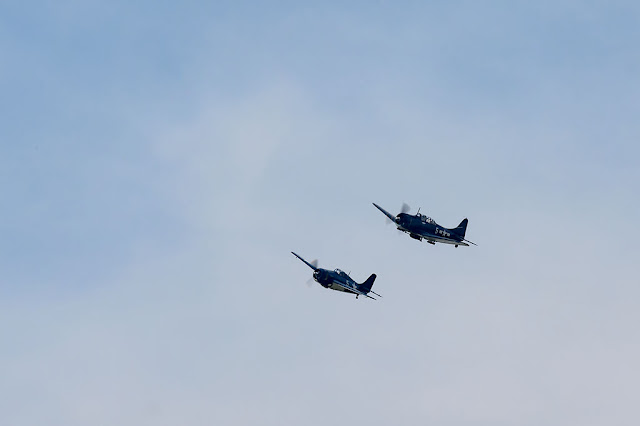 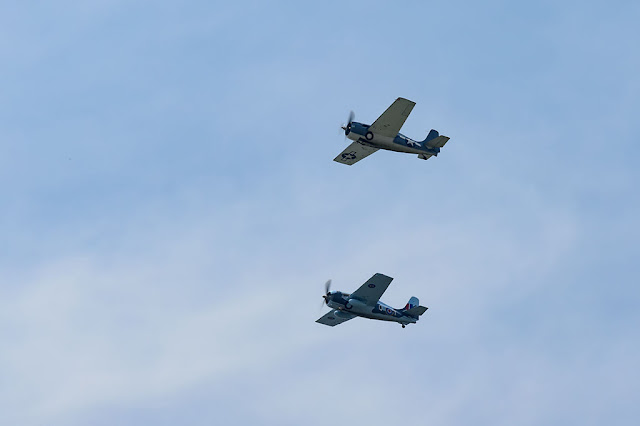 The plane that I had come to see was a Lockheed P-38J Lightning, "Ruff Stuff".  The twin booms and central cockpit of the Lightning make it one of the most recognized fighters of WWII. Because of its long range it was chosen to intercept the Mitsubishi "Betty" bombers carrying the general staff of Admiral Isokuru Yamamoto, the commander of the Japanese fleet. 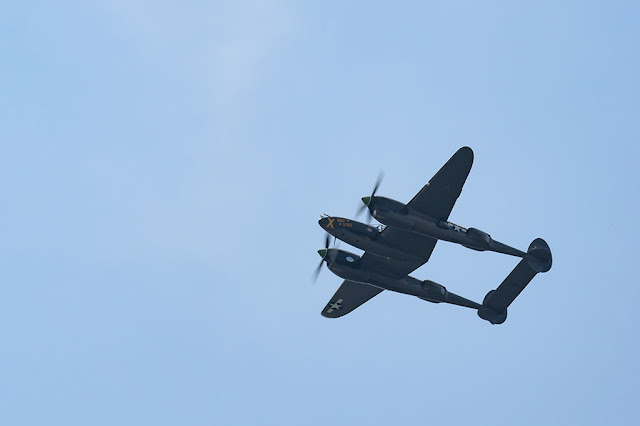 Seeing a WWII bomber with a fighter support group over Washington, DC was awesome. Representing the Ploesti Raid were the Consolidated B-24 Liberator "Diamond Lil" and  three North American P-51 Mustangs. 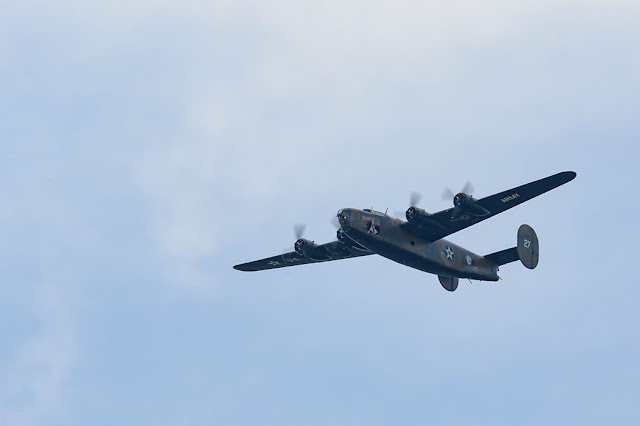 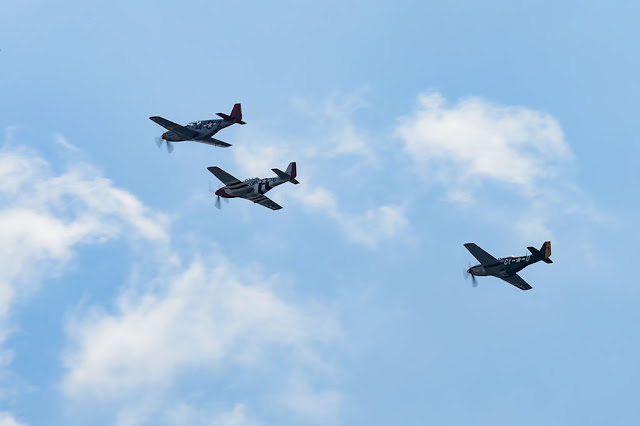 Another group of four North American P-51 Mustangs made up the "Escorting the Bombers" group. Their shiny skins glistened in the noon-time sun. 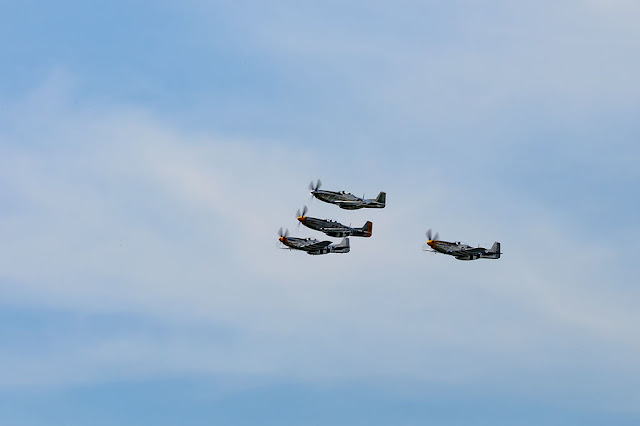 For the "Big Week" group, two B-17 Flying Fortresses, "Aluminum Overcast" and "Texas Raiders", flew over the Jefferson Memorial and next to the Washington Memorial. 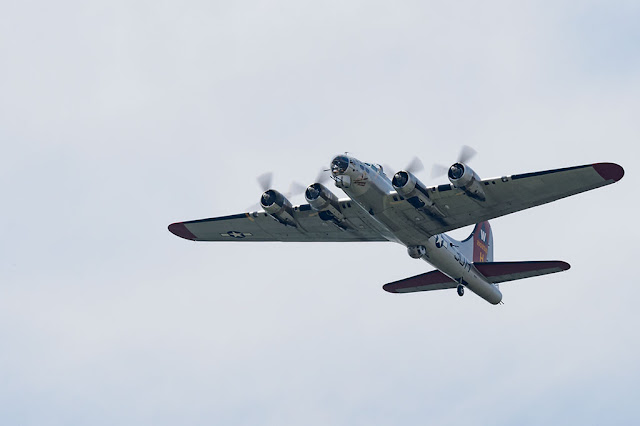 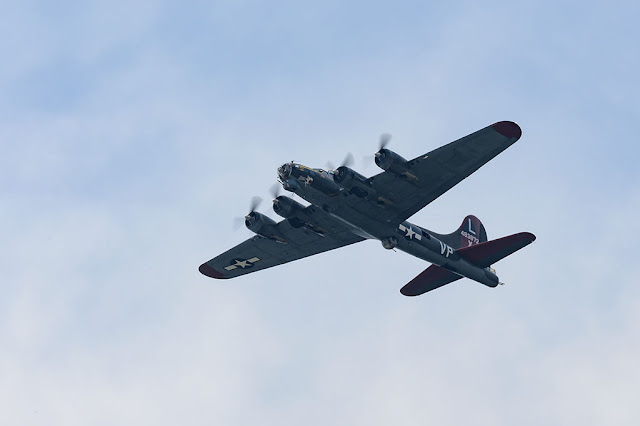 A Douglass C-53 Skytrooper, "The Duchess of Dakota", and a Douglas C-47 Skytrain, "Miss Virginia", were the planes representing the D-Day group. 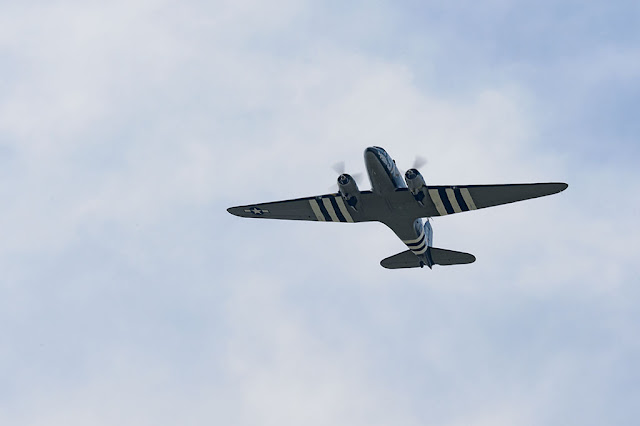 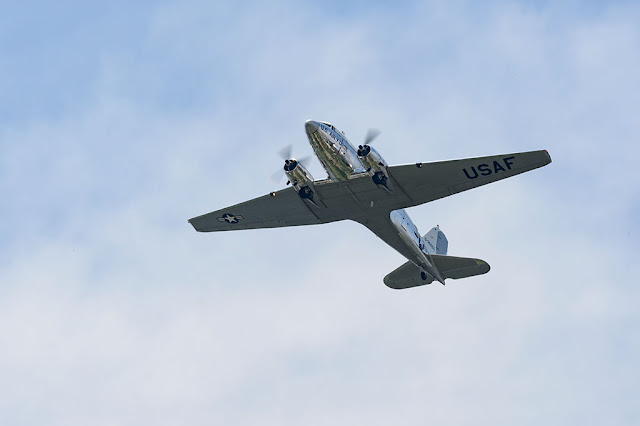 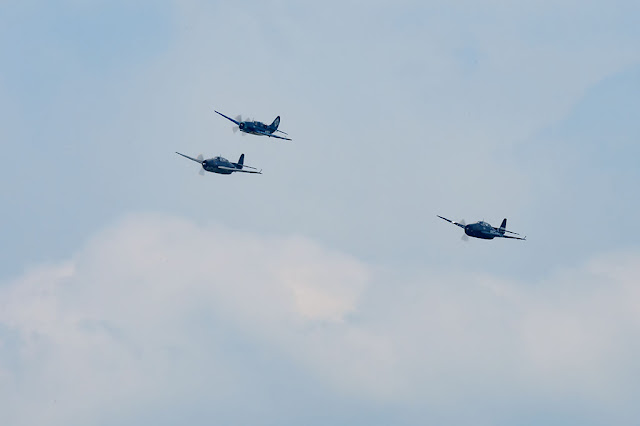 To represent the Battle of the Bulge a Douglass A-26B Invader, known as "Silver Dragon", could be seen flying over Washington, DC. The restoration of this aircraft has been simply beautiful. This was the fastest bomber that the US had during the war. 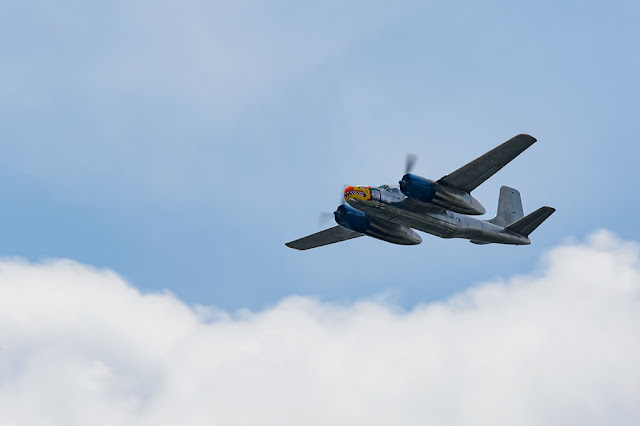 A pair of Goodyear FG-1D Corsairs made their presence known as they flew over the Mall representing Iwo Jima. 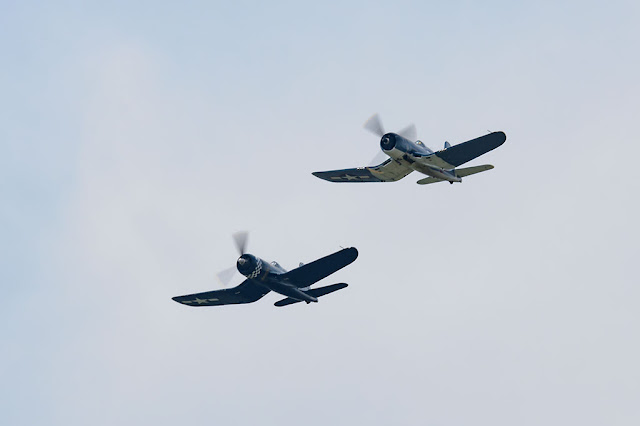 The Final Air Offense group was represented by the always impressive Boeing B-29 Superfortress, "Fifi". 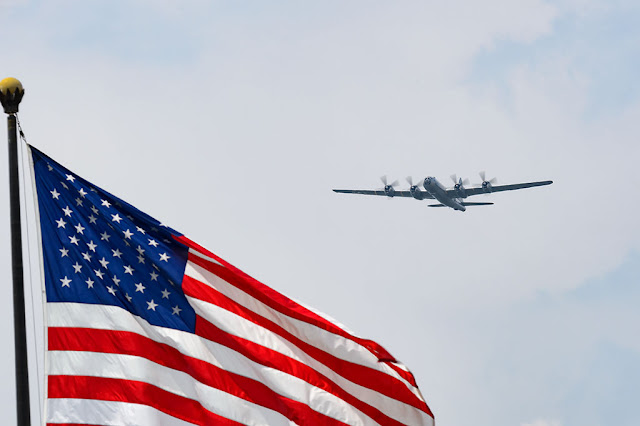 As taps echoed from the WWII Memorial, four planes honored the fallen in a Missing Man Formation to close out the ceremonies. The planes were a Grumman TBM Avenger, a Goodyear FG-1D Corsair, a Curtiss P-40 Warhawk, and a North American P-51 Mustang. Light blue smoke was trailed from the Corsair. 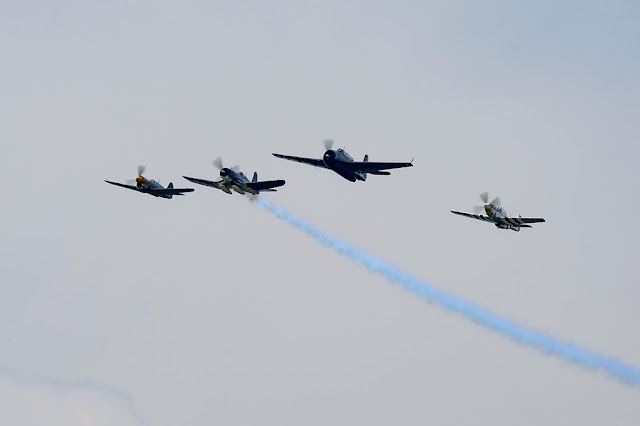 Be sure to check out more of our photos over on our photo website. BG Customs Photography