Have you been to Niagara Falls? - Part 1

Niagara Falls is listed as one of "Seven Natural Wonders of North America." At peak flow over Six million cubic feet of water each minute cascades over the three falls that make up Niagara Falls: Horseshoe Falls, American Falls (Rainbow Falls), and Bridal Veil Falls (Luna Falls). The highest drop is from the Horseshoe Falls at 173 feet. The American and Bridal Falls are actually a little taller at 182 feet but because of all the talus, or broken rock, the longest continuous drop is more like 70 feet.

Did you know they actually control how much water goes over the falls?  The Niagara River flows at about 12 million cubic feet per minute so already half the flow is diverted for hydro generation. After 10pm, during the tourist season, they drop the flow of water down to only 3 million cubic feet! That's only 1/4 of what could be going over the falls. Between November 1st and April 1st the flow stays at the 3 million mark. 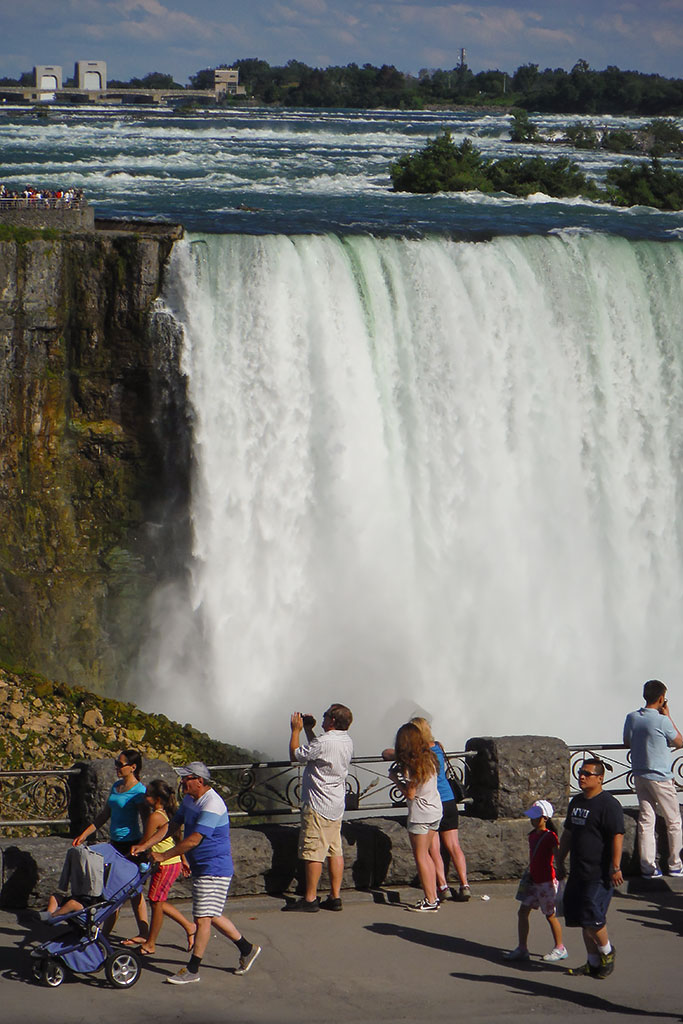 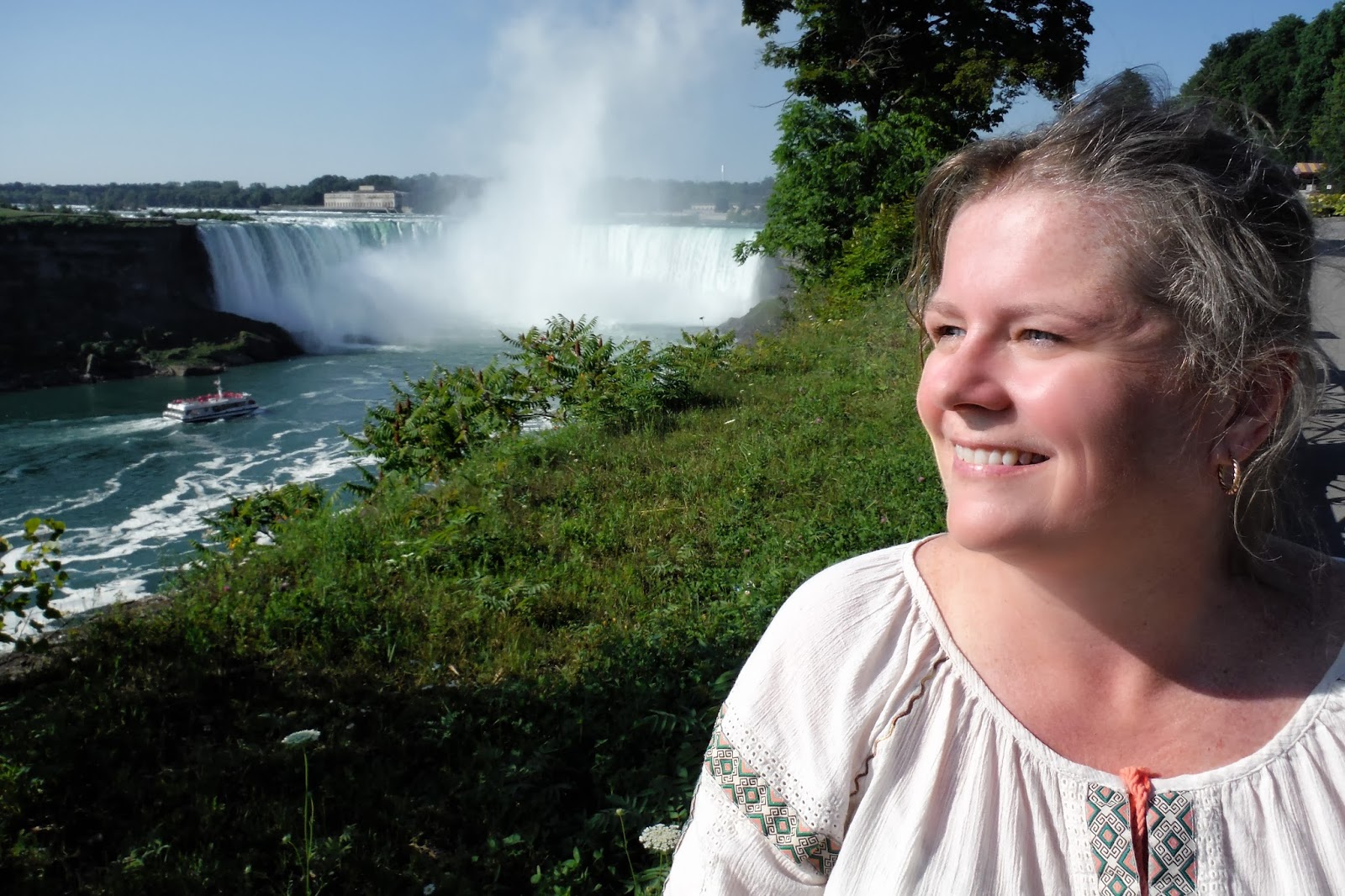 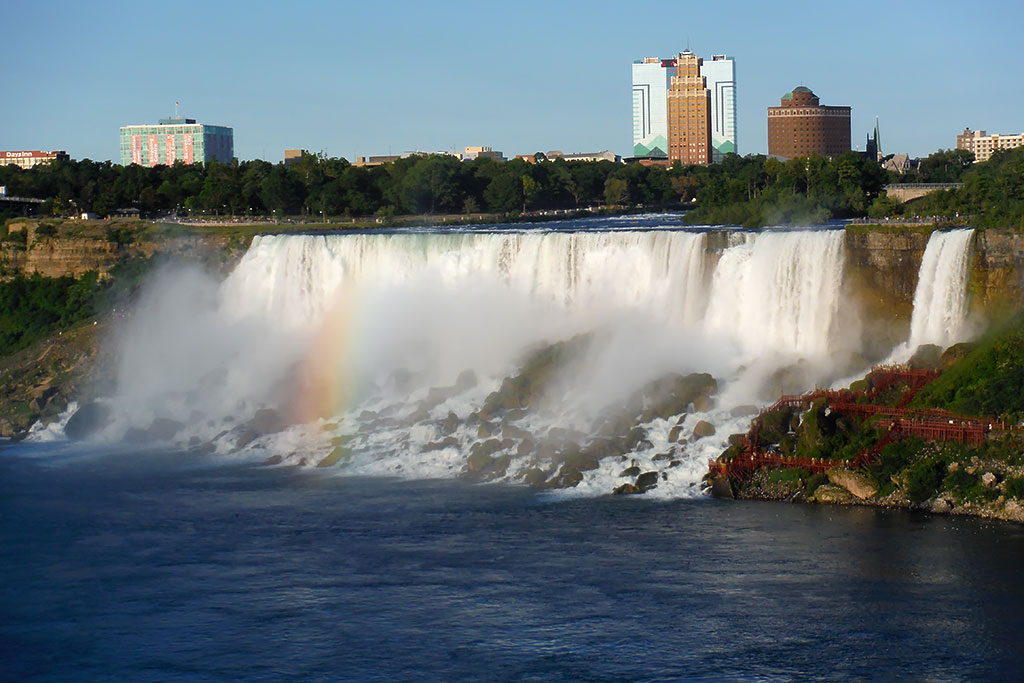 On a sunny day, and if there haven't been any recent storms upriver, the water going over the falls is a brilliant blue/green color. The color is caused by sunlight refraction and microscopic plants in the water. It really is very pretty. 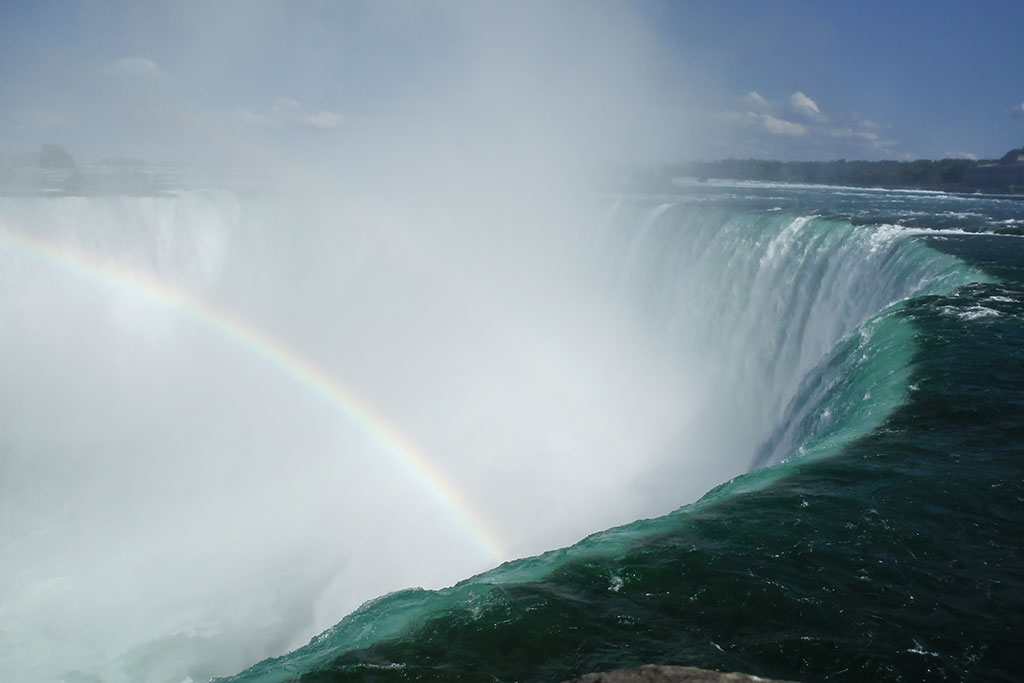 At night they turn on the lights! The first time the Falls of Niagara were lit was way back in 1860 for the Prince of Wales. The current lights were installed in 1998 and use lamp bulbs supplied by OSRAM GmbH of Germany and last about one season. There are twenty-one lights and each bulb costs around $1,400 to replace. Four gelatin panels of red, blue, purple, and amber are used to create the colors for the falls. On select nights there are also fireworks. While they are nice the show is very short at maybe 10 minutes of actual display. 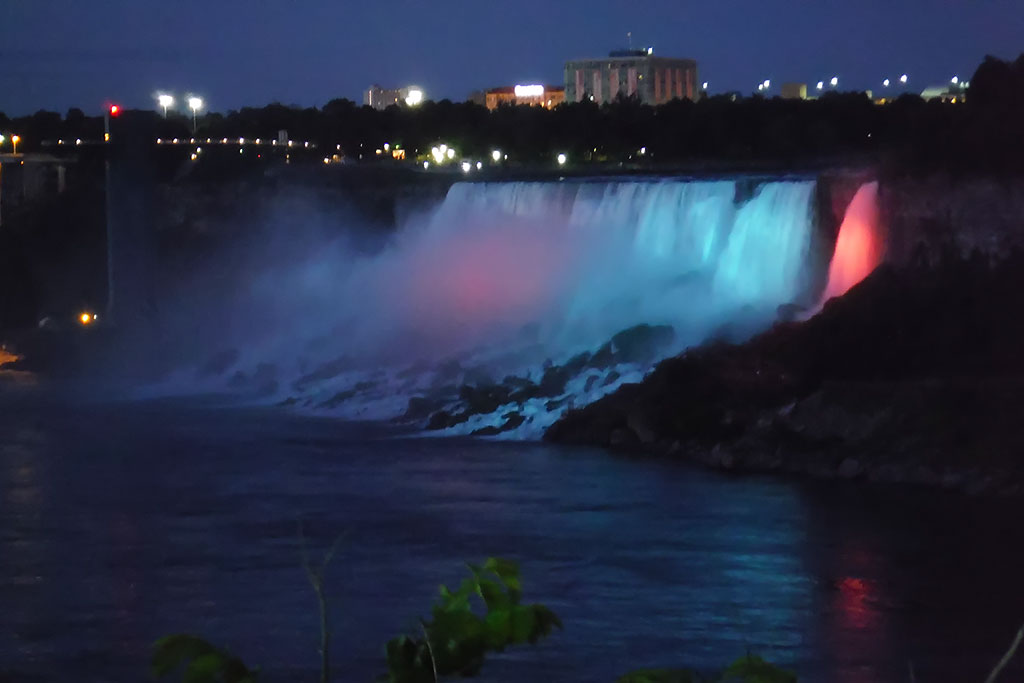 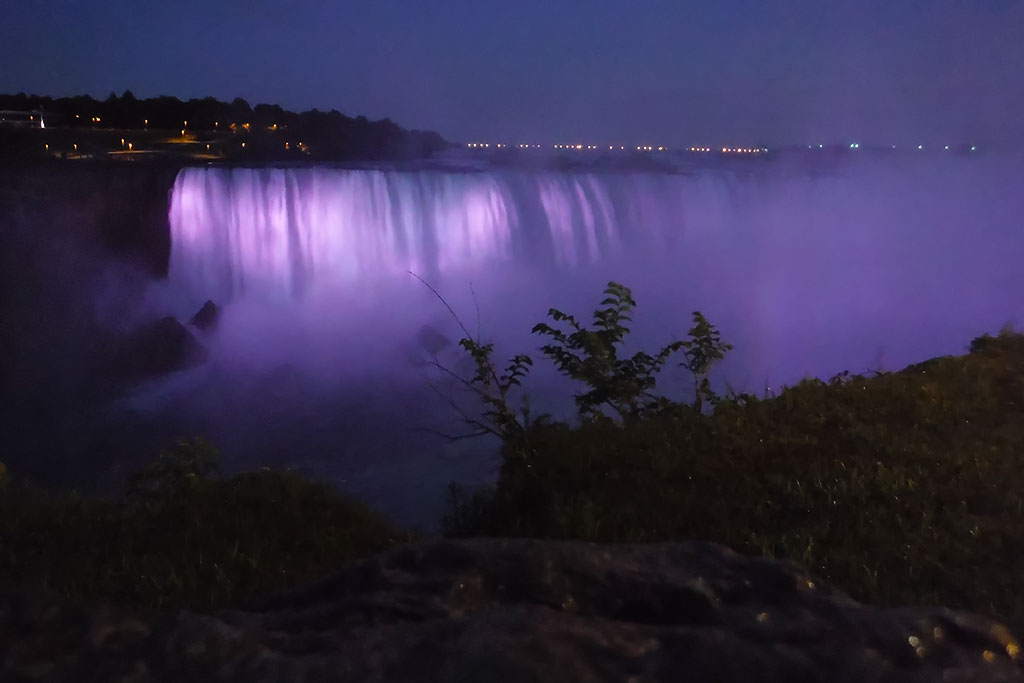 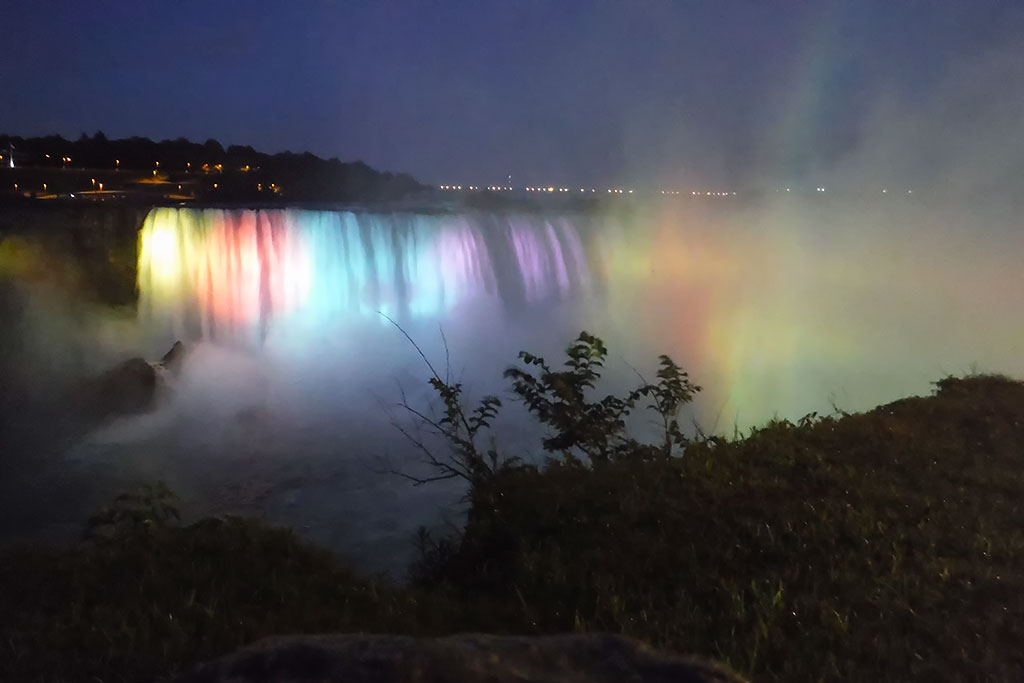 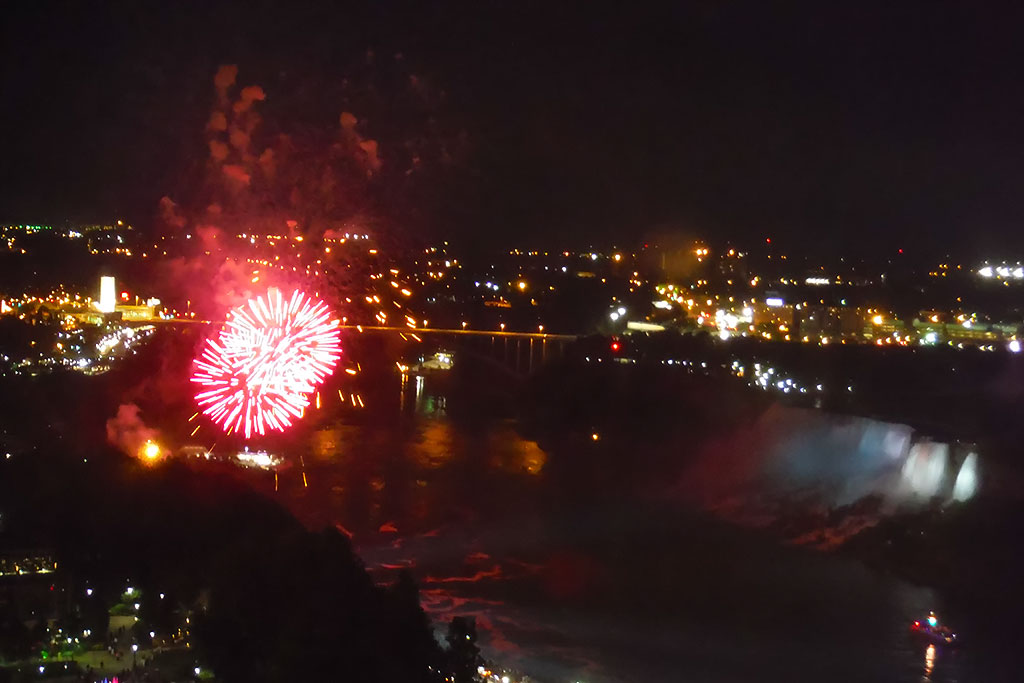 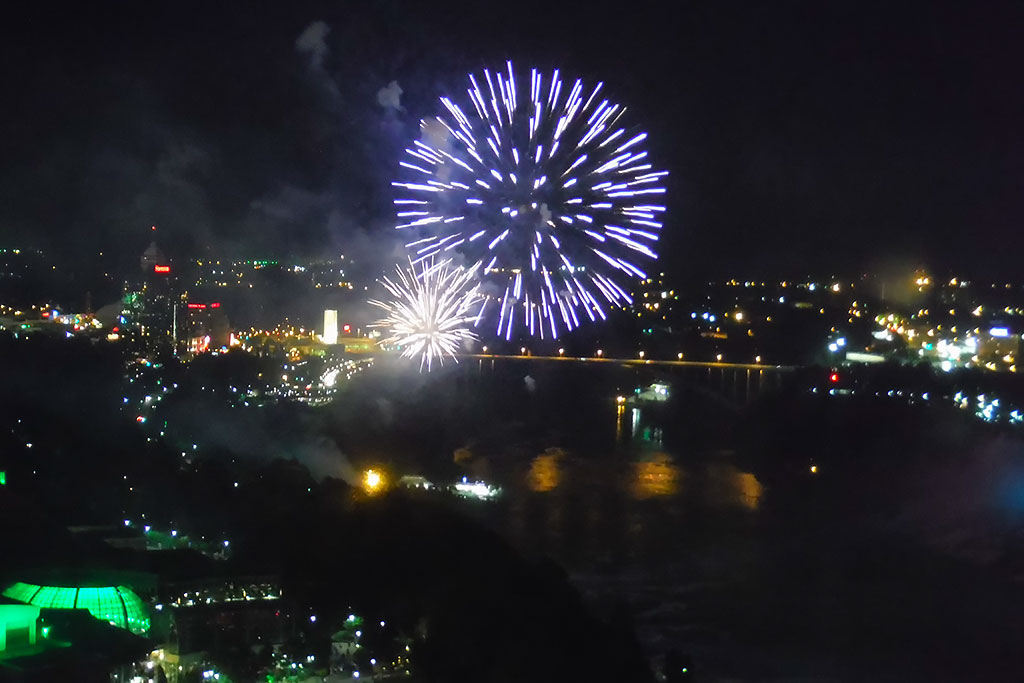 Want to stay at a good hotel with a great view of the Falls?  The Tower Hotel is a boutique hotel and a good choice for couples. It originally opened in 1962 with major funding from the House of Seagram Company, a Canadian Distillery. It is 325 feet tall and is serviced by 3 elevators. The Tower has struggled in the past and been known by many names over the years: Seagram Tower (1962), Heritage Tower (1966), Royal Inn Tower (1971), Royal Center Tower (1972), Panasonic Tower (1973), Minolta Tower (1984), and now The Tower Hotel (2002). Request a Fallsview room and you won't be disappointed. The rooms are comfortable, the staff is helpful, and more importantly the hotel is very quiet. It's not cheap but then nothing really is in Niagara. We stayed in room 2802. You have got to love the tiny funky pie shaped shower! 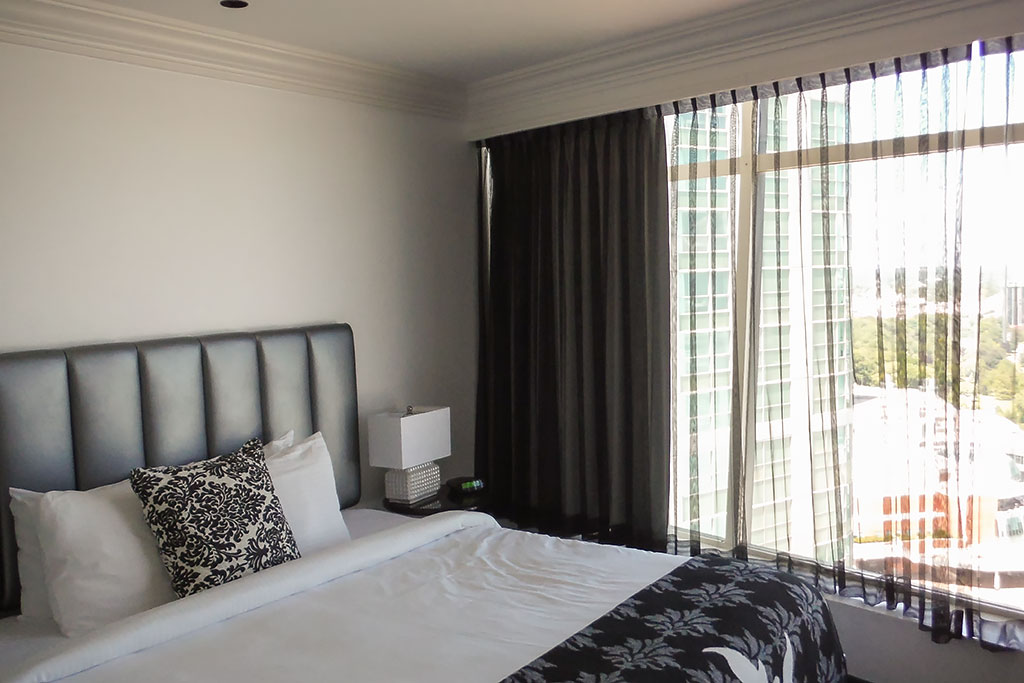 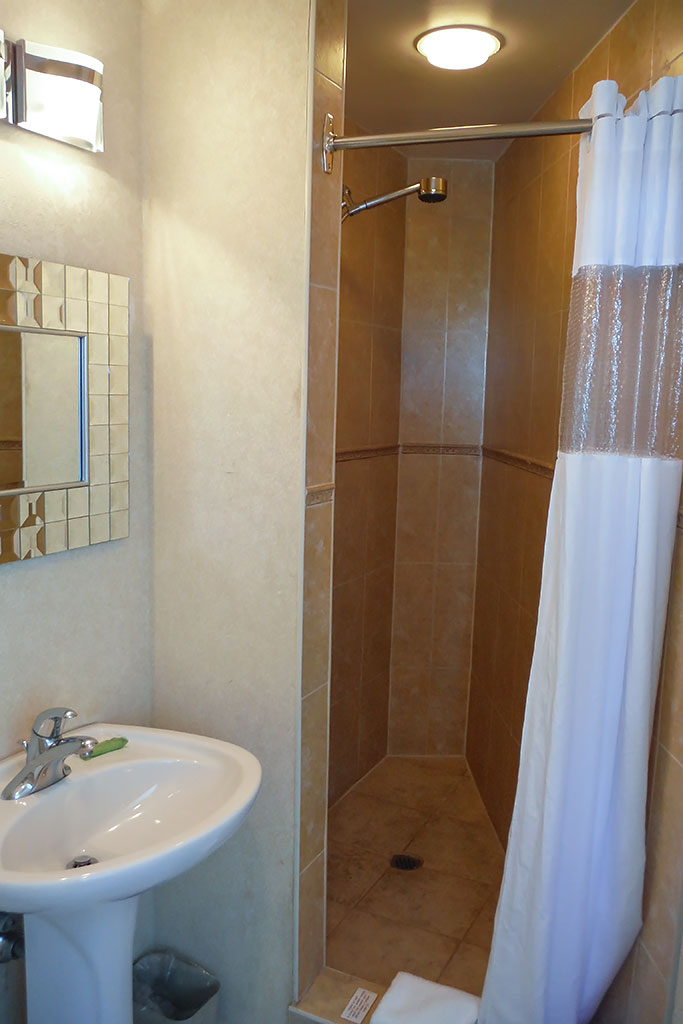 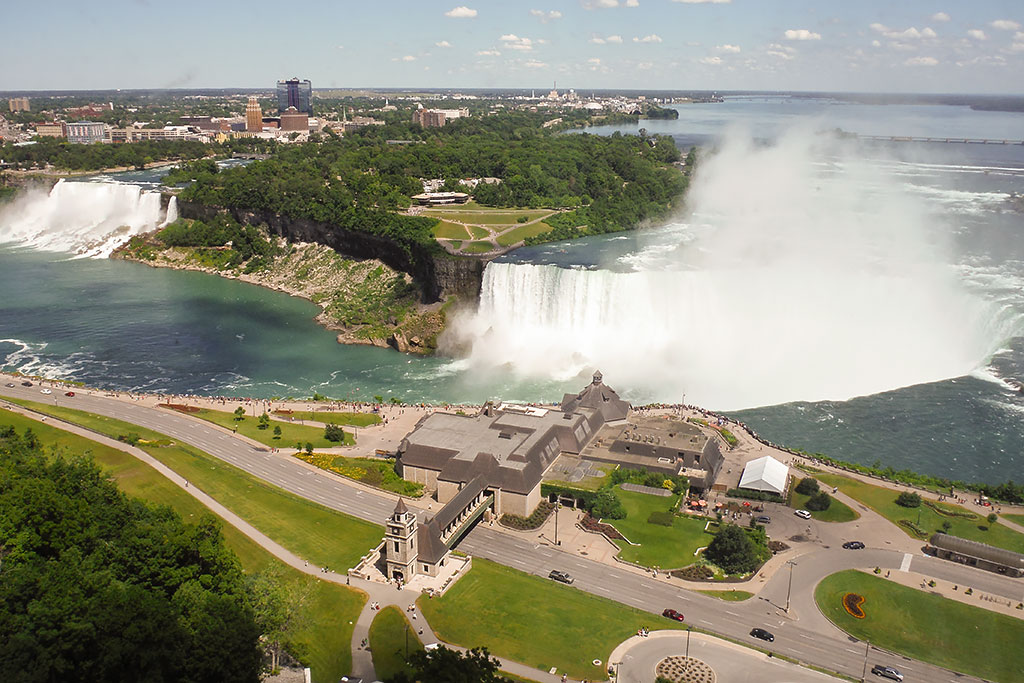 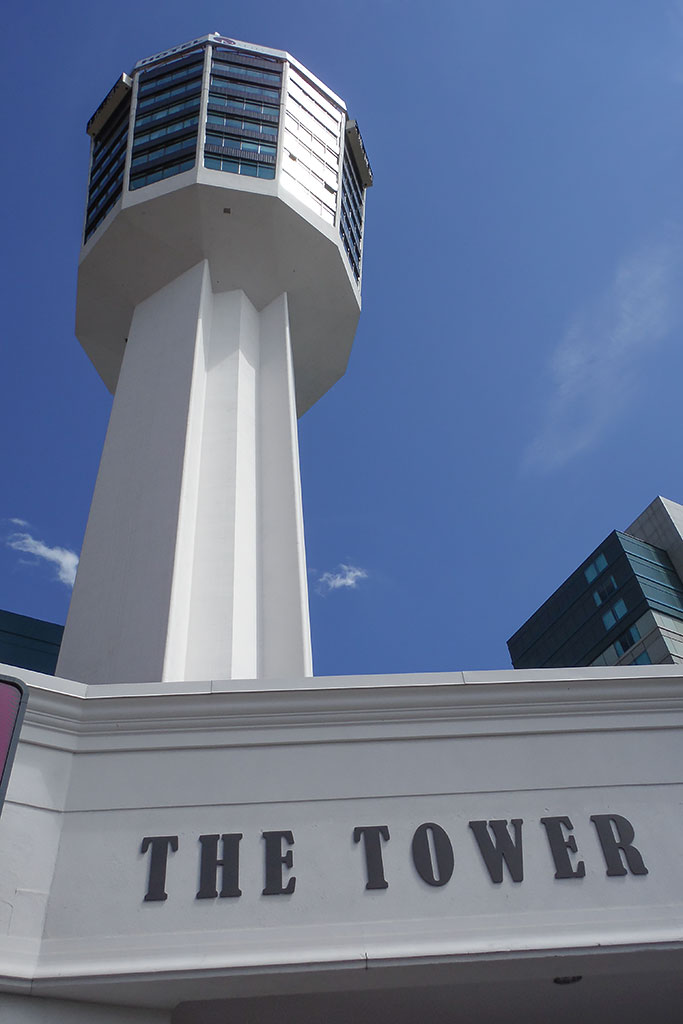 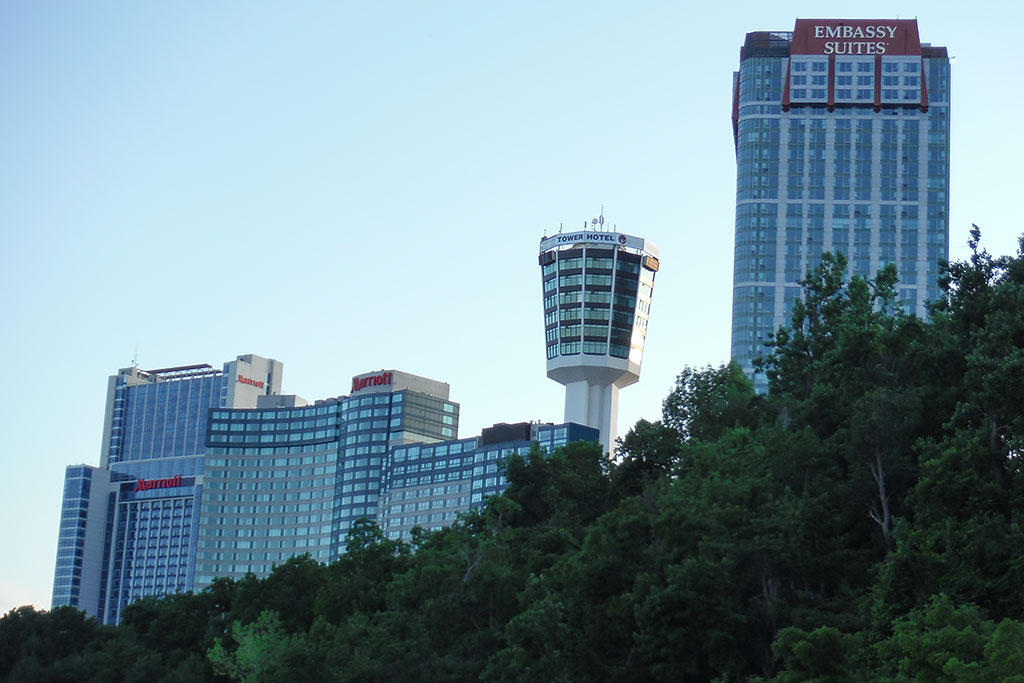 In an attempt to save a little money we purchased the Niagara Falls Adventure Pass Nature. This included admission to the Whirlpool Aero Car, Hornblower Niagara Cruises, the Floral Showhouse, and the Butterfly Conservatory. The pass also included 2 days of bus transport on the WEGO. We also added Journey Behind the Falls at a reduced rate.While we planned on taking two days to do everything we discovered that you could easily do all this in a single day with a little planning.

First up was the Hornblower Niagara Cruises Early Morning Sunrise boat tour.  Getting up to be on the boat at 7:45am was probably one of the best decisions of our trip. There were only a few other families on the catamaran with us. Compare this to the shoulder-to-shoulder crowds of the midday cruises. Because the sun is low in the sky at this time you also get rainbows!  This is an absolute must do activity when in Niagara. The crew is great, the views are spectacular, and getting pounded by the spray of the falls is truly unforgettable. 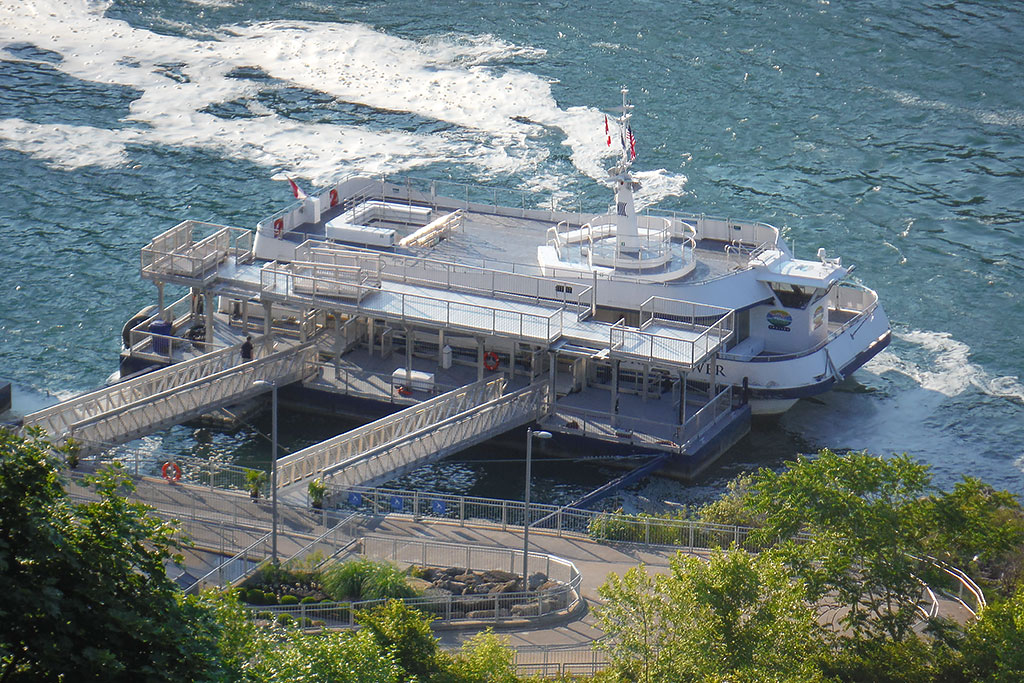 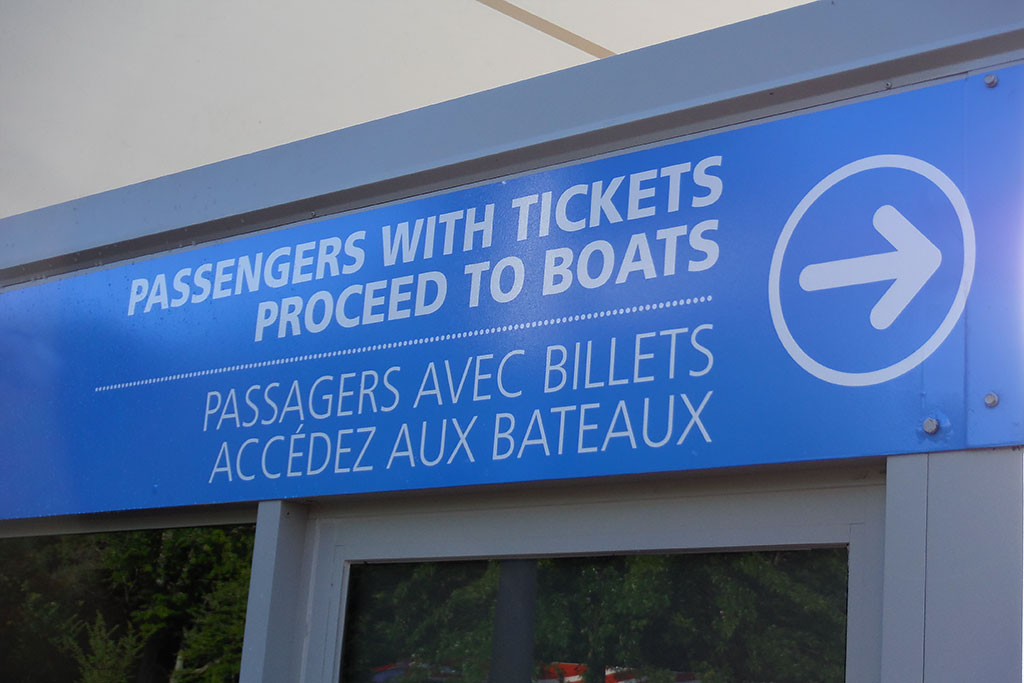 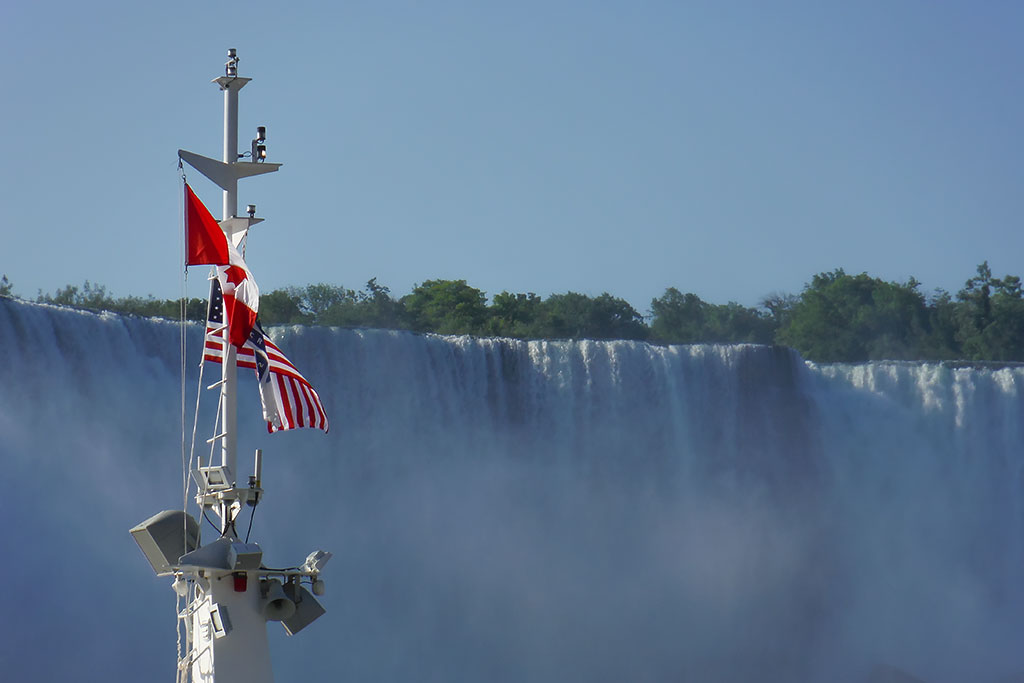 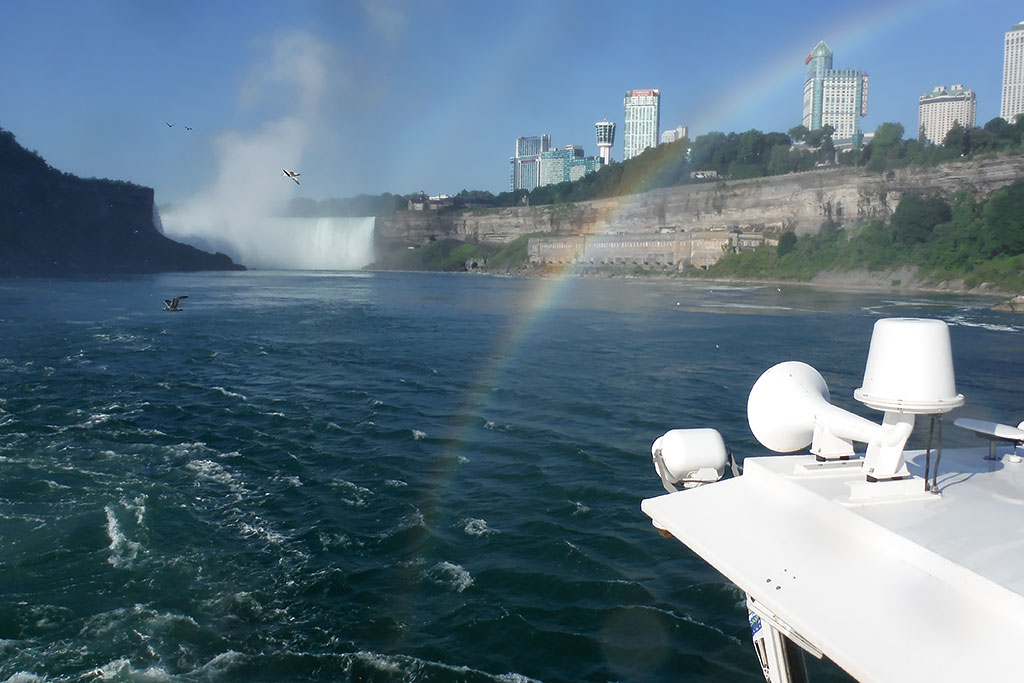 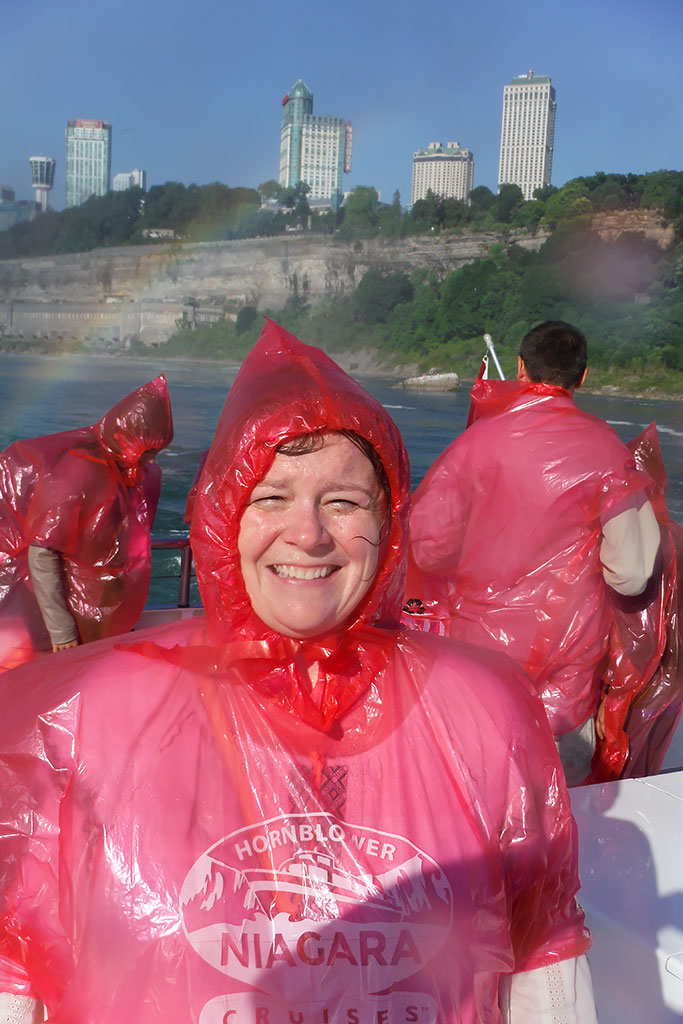 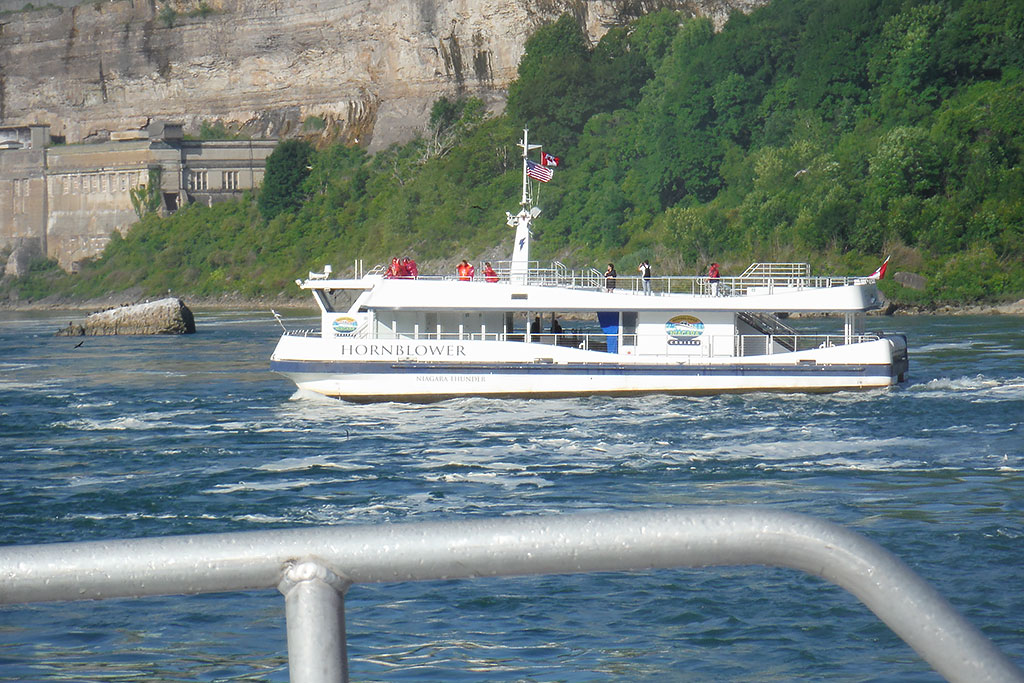 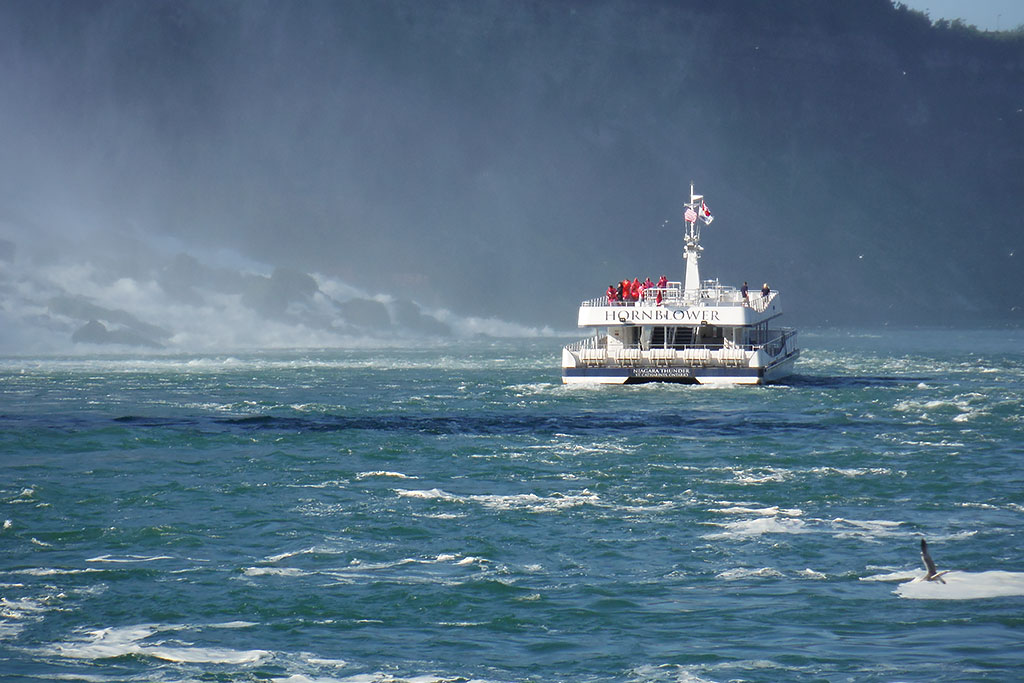 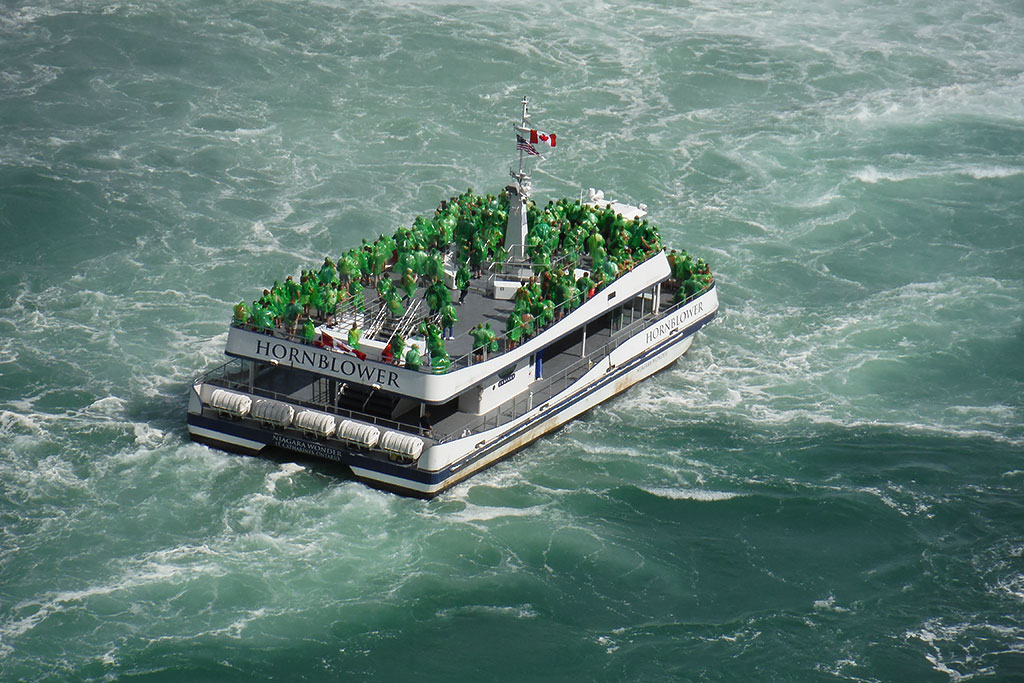 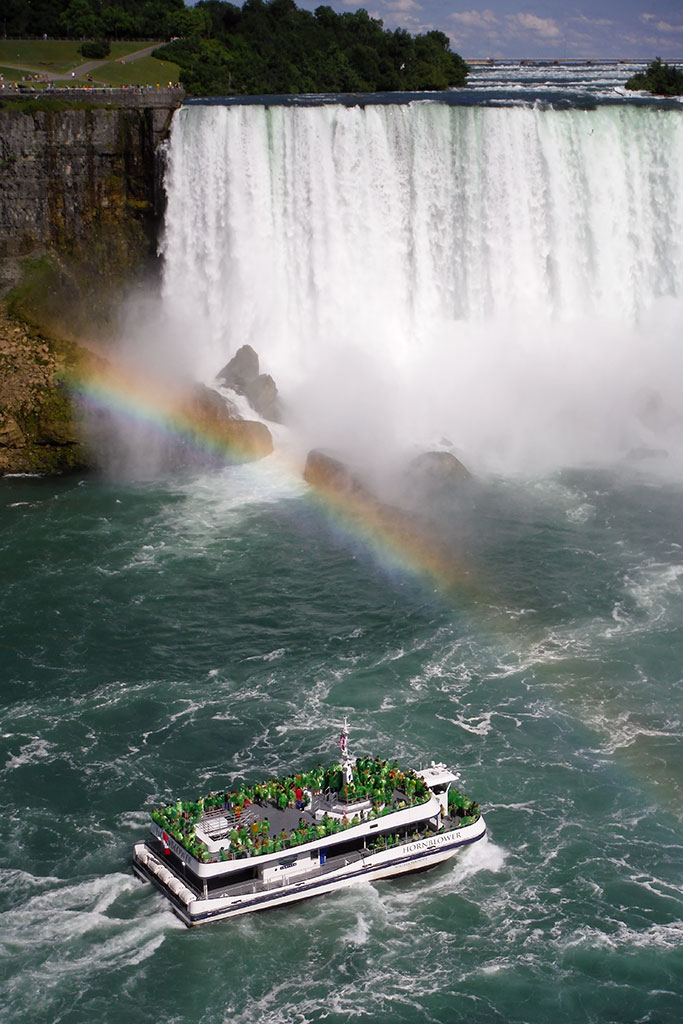 Since we were already wet we then went to the Journey Behind the Falls. The walk in the tunnels behind the falls is okay but what you are really paying for is the incredible views that you get from the observation deck next to the Horseshoe Falls. Tours started back in 1818 when the attraction was known as "Sheet of Falling Water." The first elevator was installed in 1887.  The first tunnels were built in 1889. The tunnel as it is today was built in 1944 and the name was changed to "Journey Behind the Falls." The observation plaza dates way back to 1951. Up until 1990 you were given raincoats and boots but now plastic ponchos are used. 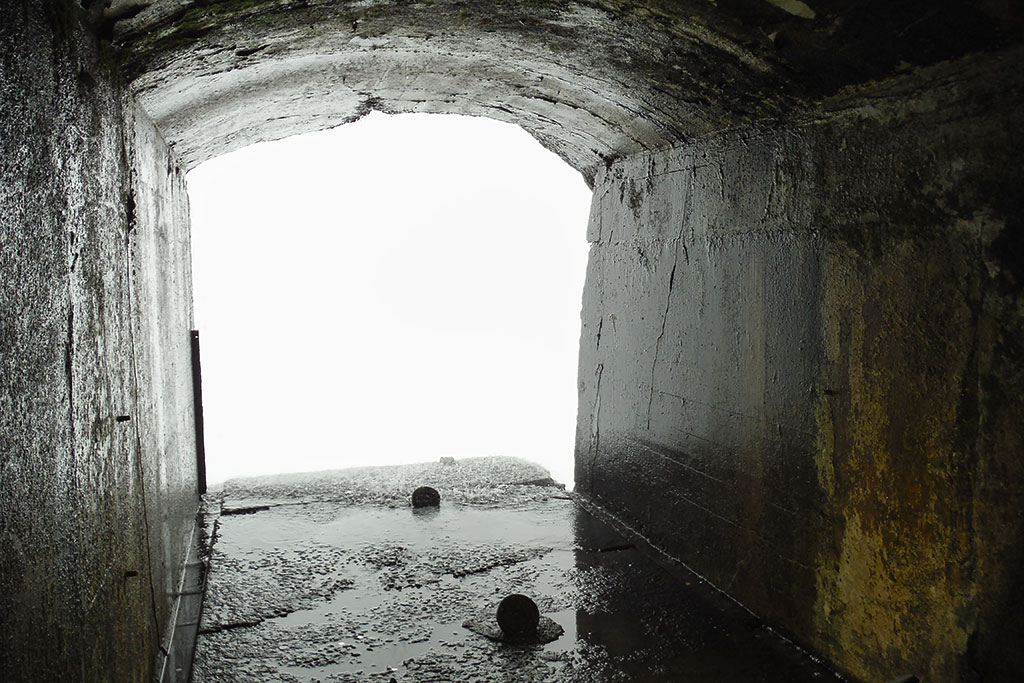 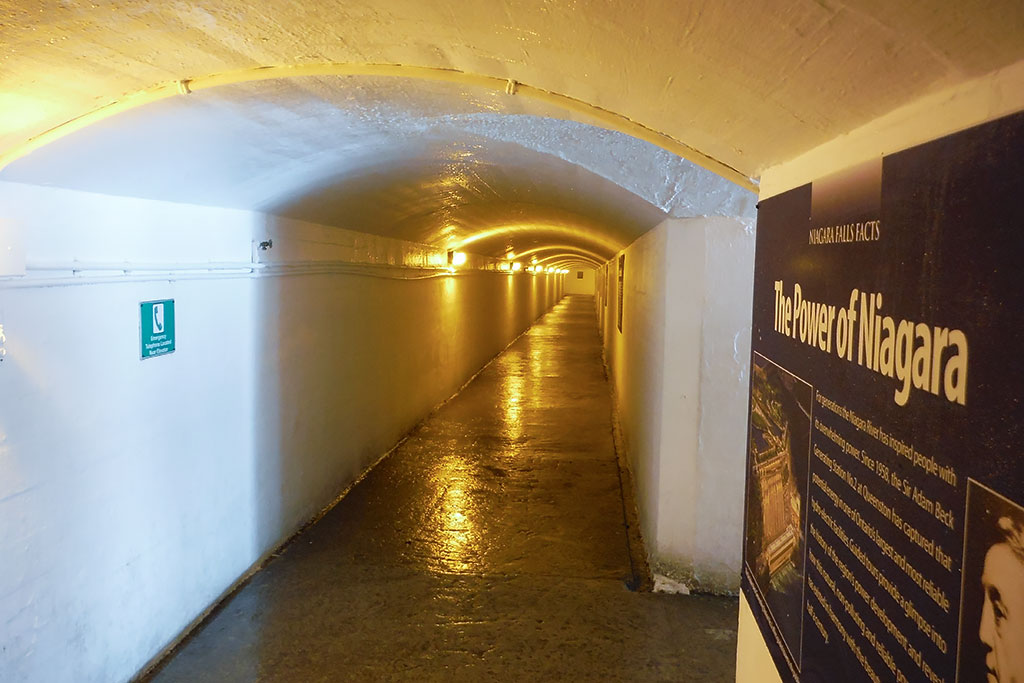 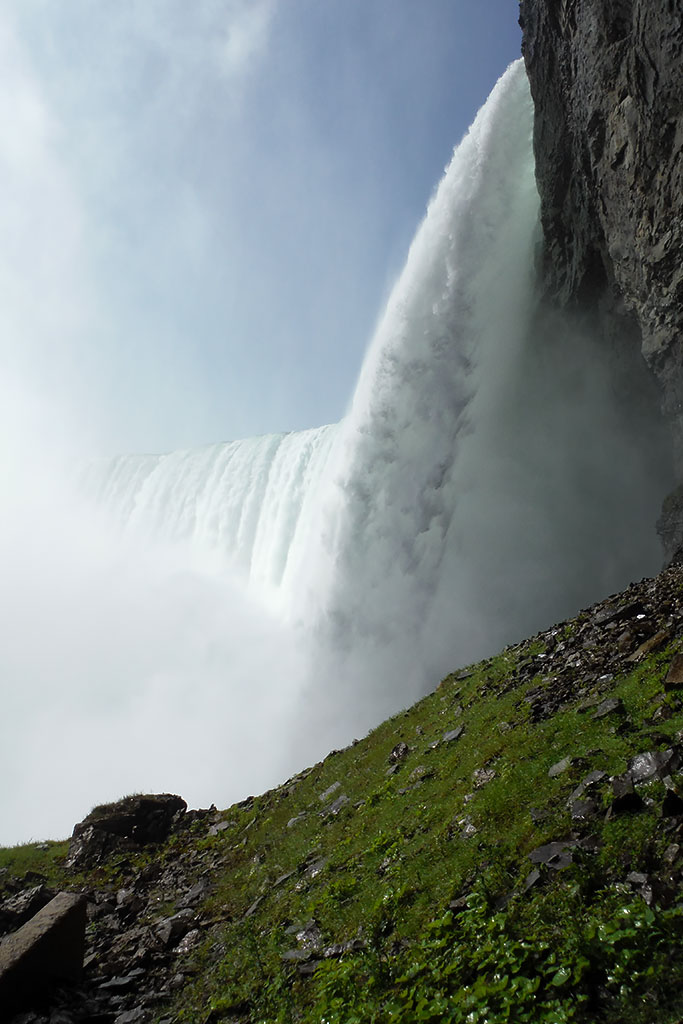 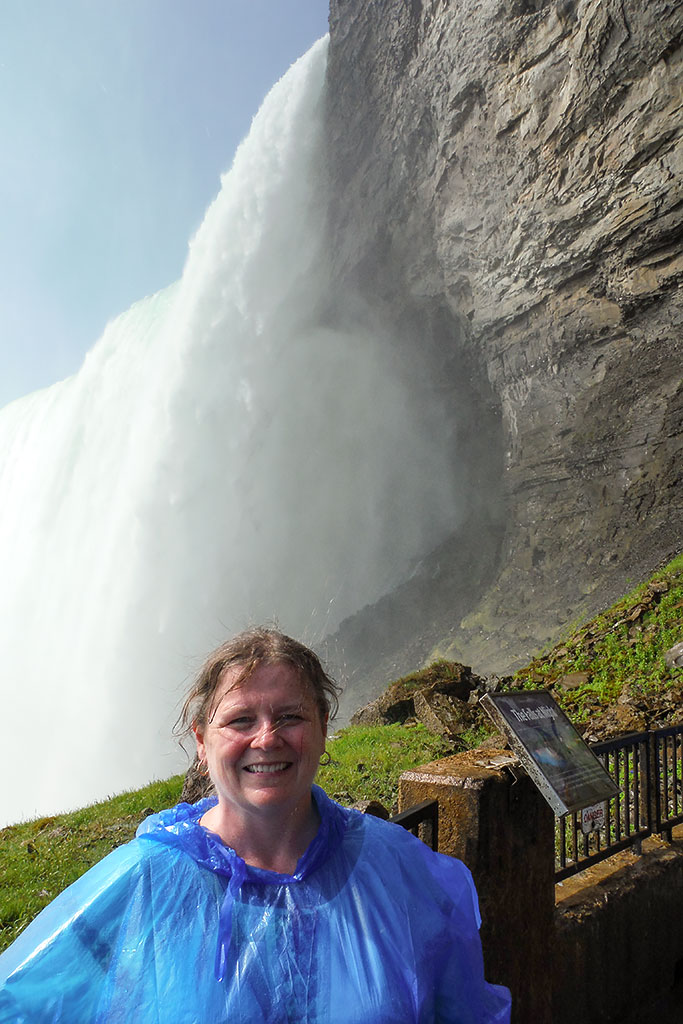 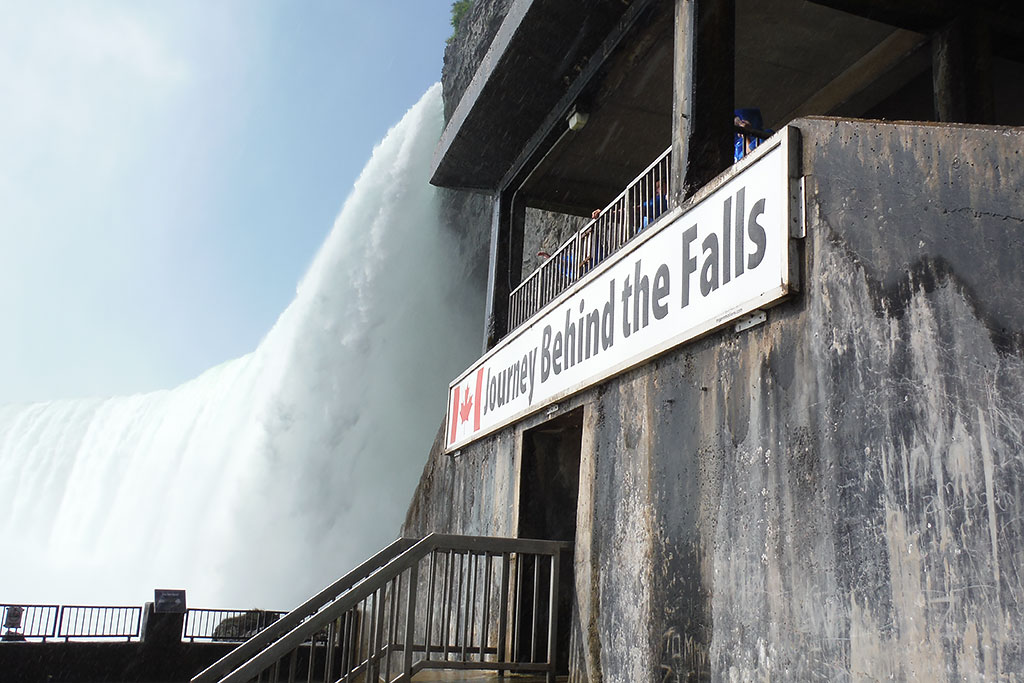 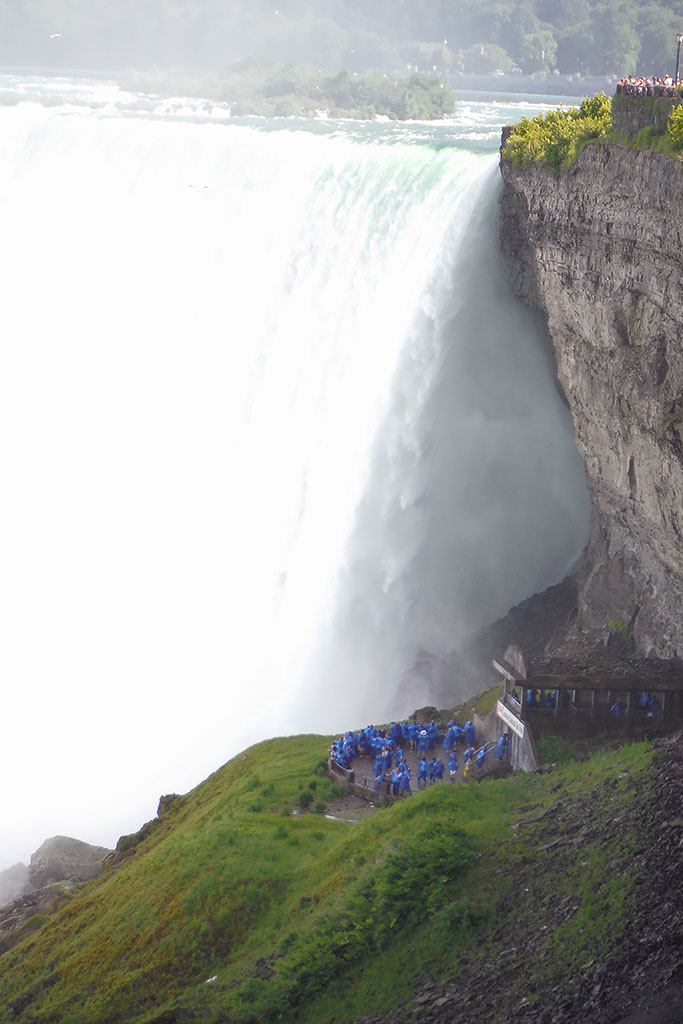 Be sure to continue on to Part 2 of our trip to Niagara Falls, Ontario, Canada.