If you ever have a chance to sail to Alaska, do it! If you can save up a little more to be able to stay in The Haven Courtyard on Norwegian Cruise Lines, do it! For our anniversary Peg and I decided we would take our first cruise to Alaska. NCL sales called us, last minute, and offered us a deal to upgrade to a penthouse in The Haven Courtyard aboard the Norwegian Pearl. We did and it was fantastic! The Bird of Paradise Courtyard Suite Room 14014 (an S5 level penthouse suite) would be our home for the seven day cruise which started in Seattle, Washington. 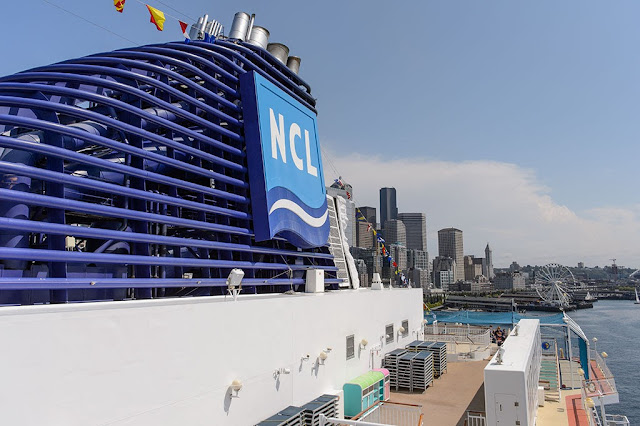 One of the perks that NCL offers to its guests that stay in a penthouse or suite is preferred boarding. We were escorted onto the ship, bypassing the regular lines, where we ate a private lunch a Cagney's. We took the extra time to walk the ship and figure out where everything was. The upper decks make for some great photos. 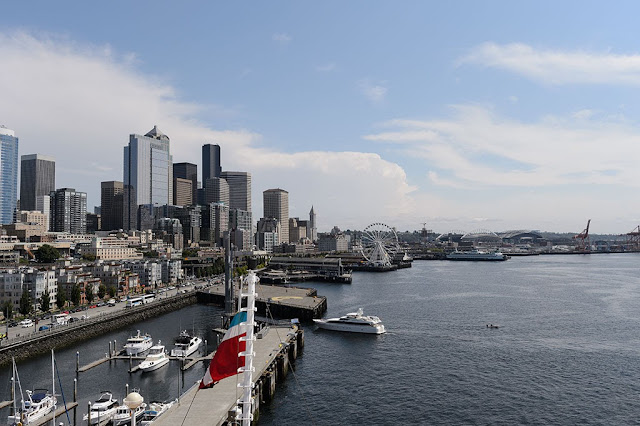 NCL bombards you with sales pitches. It is almost like a timeshare pitch at times. We decided to go with the flow and take the spa tour. We knew it was really for them to sell their services but we did want to see what was offered. Plus this was my only chance to take a camera in without getting the creepy old man treatment. 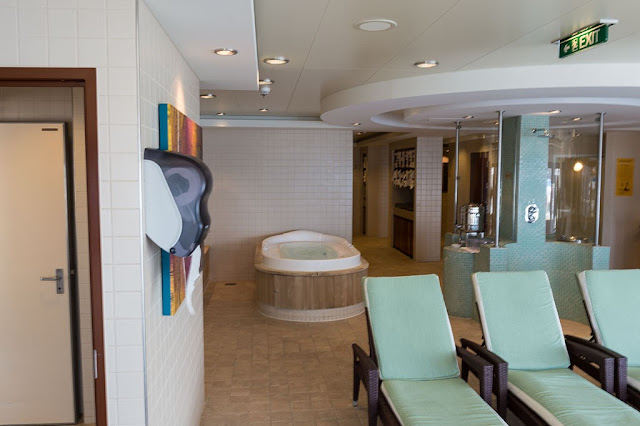 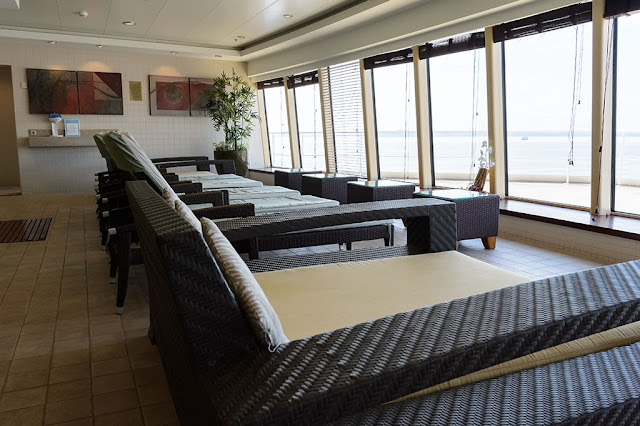 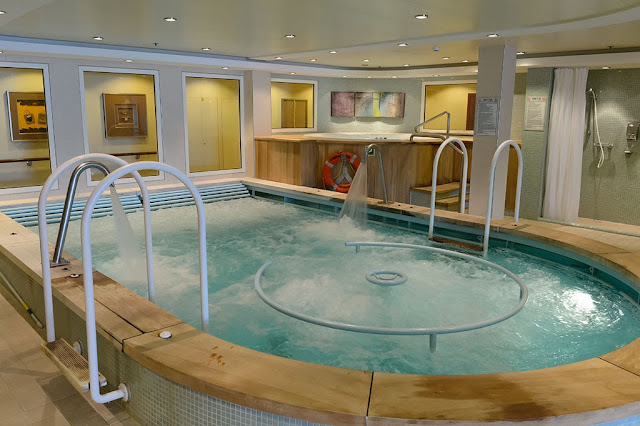 The Pearl has a nice pool area and a few people actually were hardy enough to use it on the trip to Alaska. Brrr! It was better used for partying. 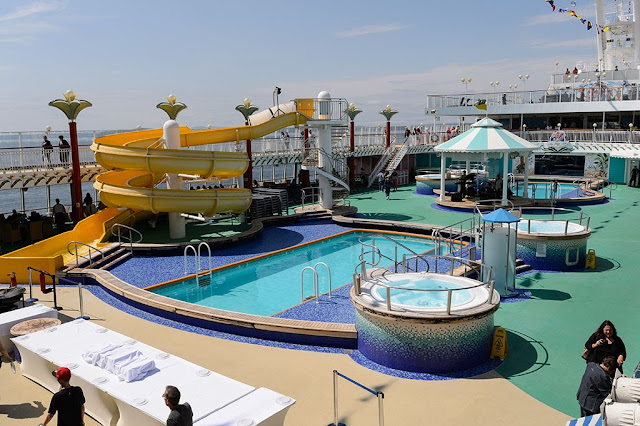 Haven guests actually have their own private sundeck. There is a keyed access on the outside and private stairs within the courtyard. 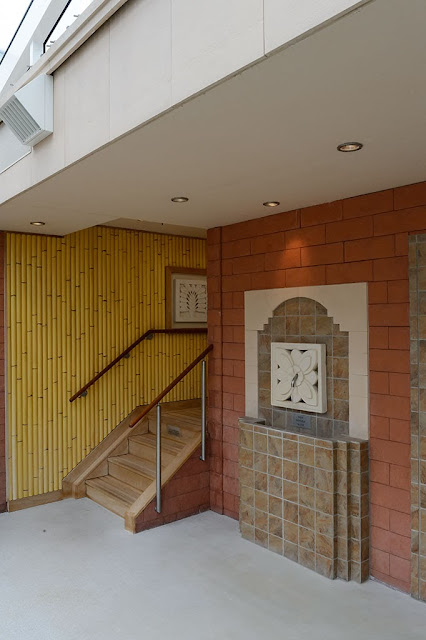 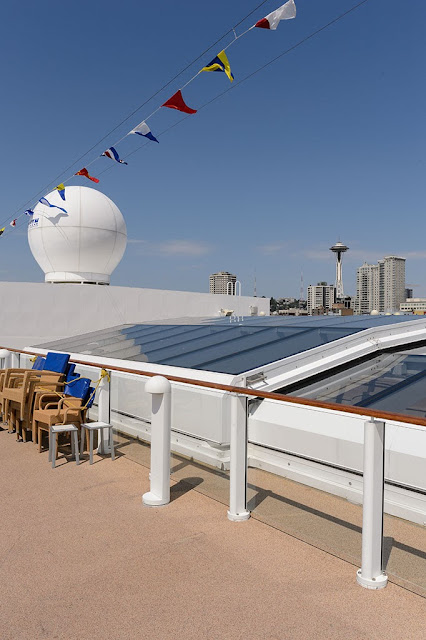 In the courtyard there was a very small pool, an even smaller work out area, but plenty of seating. The glass ceiling could be opened or closed depending on the weather. Most of the cruise it would be closed so to keep everything warm. 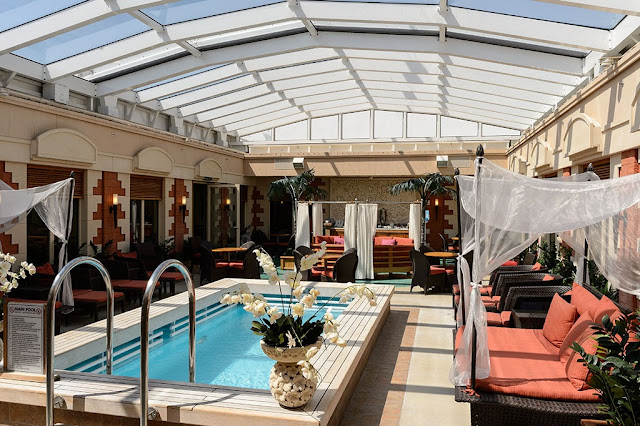 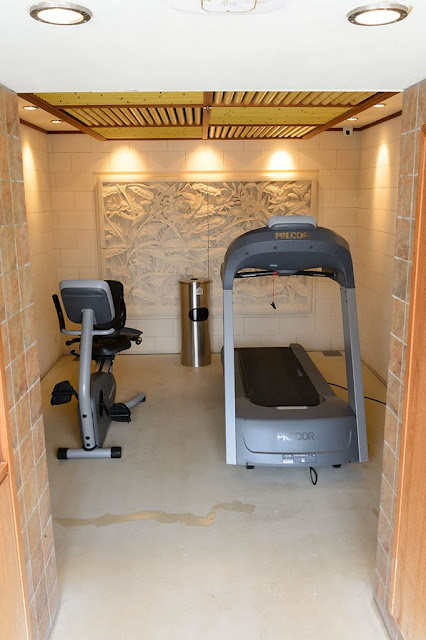 Back in the our penthouse room it was time to break out the fisheye lens and snap some photos before we scattered our things everywhere. The room was very nice and we appreciated that the bedroom was separated by a door since I am a morning person and, well, Peg is not. Since the room is on one of the highest decks it is pretty quiet. You do hear the occasional "whack" of a golf ball when sitting on the balcony from the driving range just aft of the room. 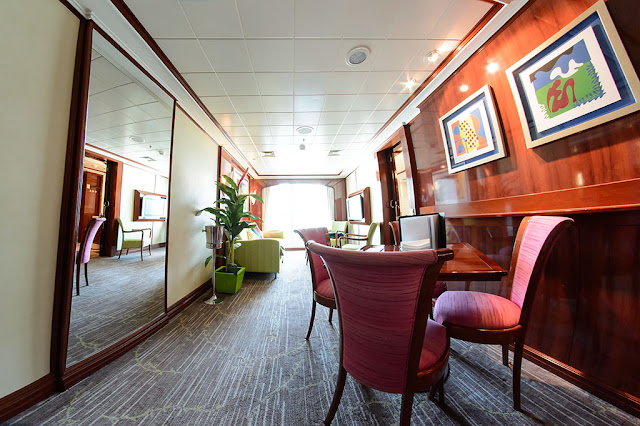 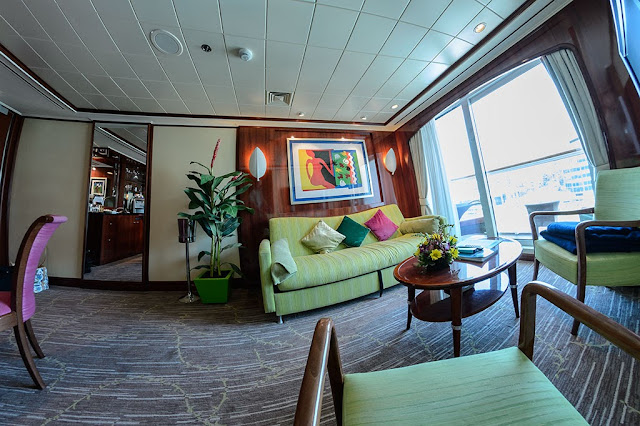 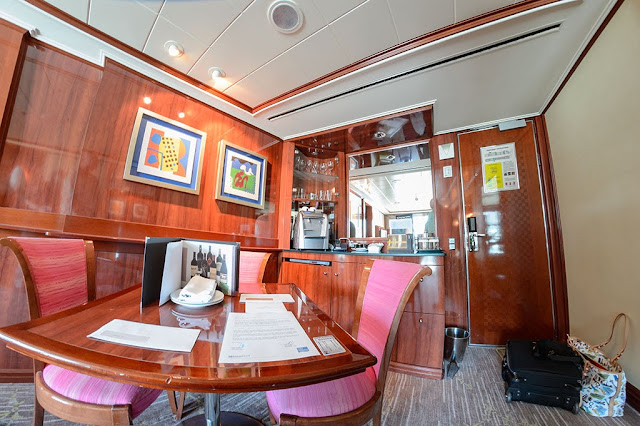 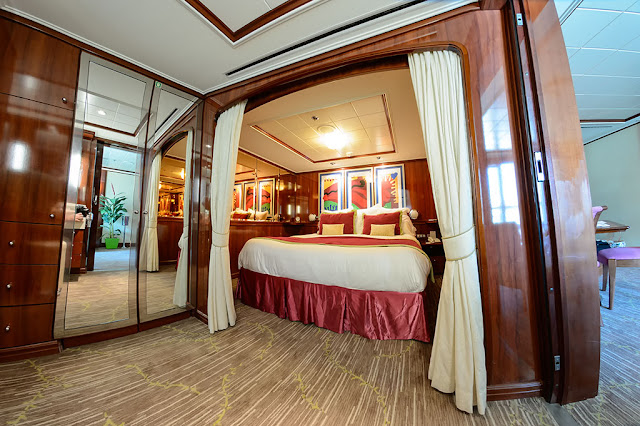 The bathroom was awesome. There was a his and hers vanity, a large soaking tub (which we actually never used), and a multi-head shower. If you wanted you could open the blinds and watch the scenery go by as you sat buck naked in the tub. I would advise that you lower the blinds while in port because you often pass other ships. 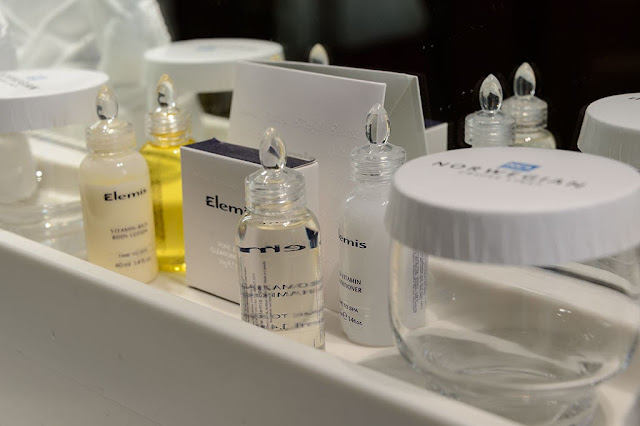 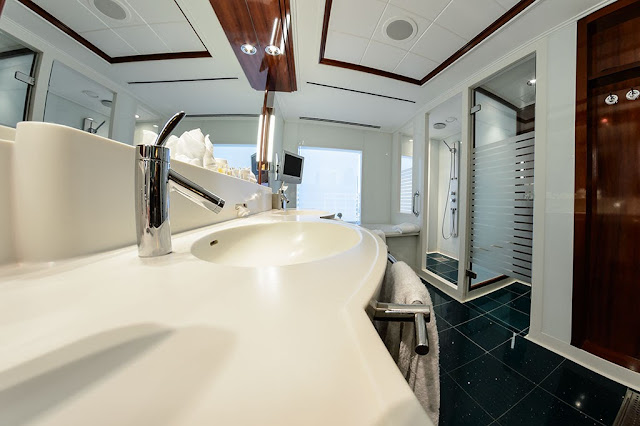 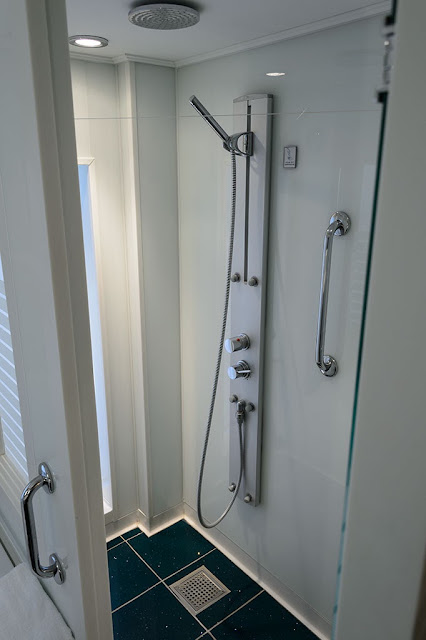 The balcony in room 14014 is a little small but it is big enough for a couple of chairs and a table. The view was often so good that we used one of the other Haven perks a lot. 24-hour butler service is included with the room! We kept Randy, our butler, busy bringing us breakfast, lunch, and snacks (pretzel rolls!).  He was simply fantastic. Hint: 14014 is on the starboard side and the private sundeck is on the port side. Why does this matter? When you are in Glacier Bay (or anywhere really) you can go from side to side without having to fight the crowds. 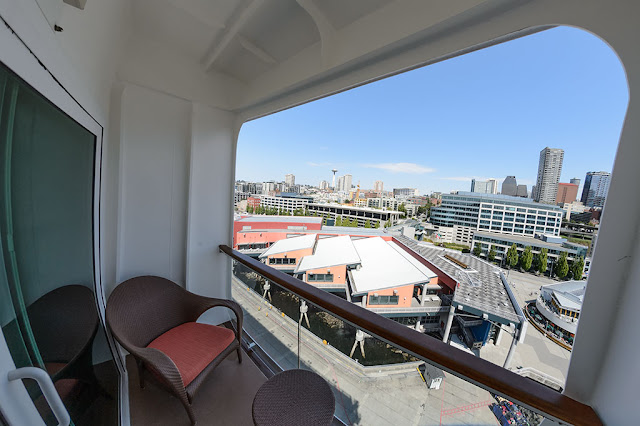 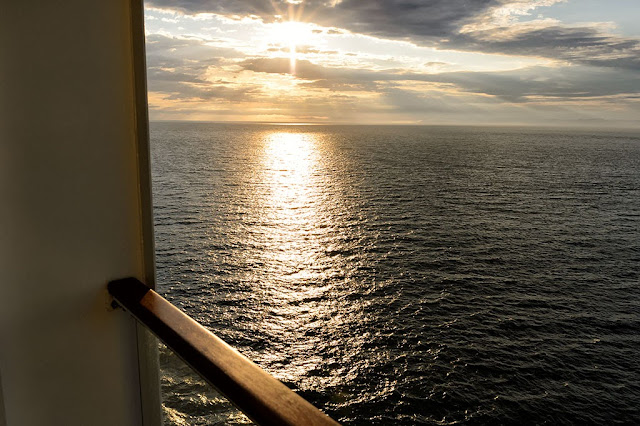 Of course we were on vacation so we had to act a little goofy. I am betting the staff wasn't used to regular folks hanging out in the ritzy part of the ship. Even though it took us a long time to save up enough to afford a penthouse suite, we never regretted doing so. Actually, we are already starting to save for our next trip back to Alaska and it will probably be on Norwegian Cruise Lines. 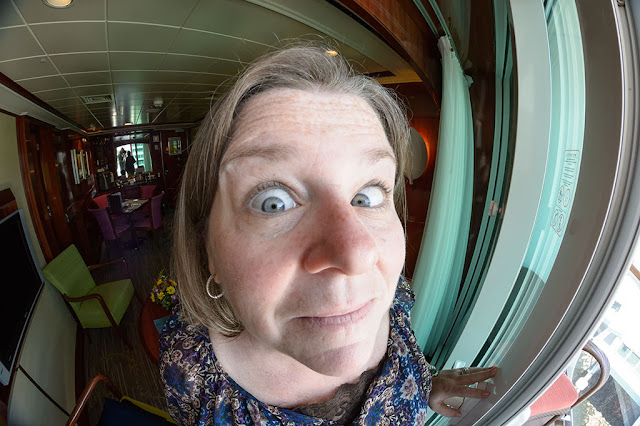 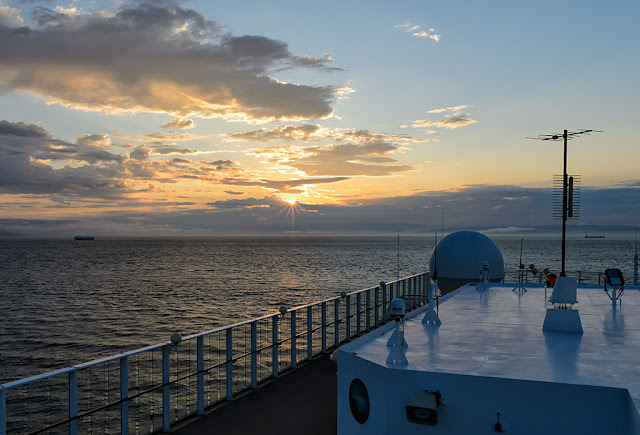