Photos from the Carlisle All-Chrysler Nationals

What group of car people do you think are the most passionate about their brand? Well if you had to judge by the number of car owners that turned out in the rain just to attend the Carlisle All-Chrysler Nationals it would have to be Mopar owners! This year I was attending solo as the rest of the crew from Bubba's Garage had other commitments. I almost turned around when I had been driving for more than an hour in a light drizzle on my way to Carlisle, PA. This was my first time attending the Mopar Show and all I can say is, "Wow!" I am glad I didn't. 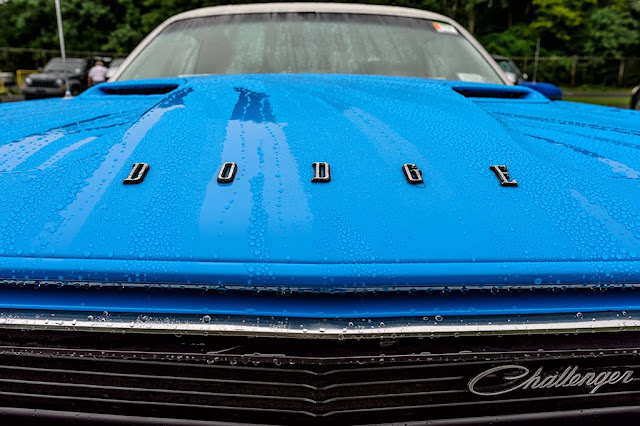 Once through the gates, I figured hitting the buildings first would be a good idea. I was hoping the rain would let up and allow things to dry out. It wasn't a hard rain just a fine drizzle that soaked everything. It really didn't matter much since I was grinning from ear-to-ear. The first car to catch my eye was Mervin and Mary Afflerbach's 1959 Dodge Custom Royal Super D 500. Don't you just love the fins and tail lights? 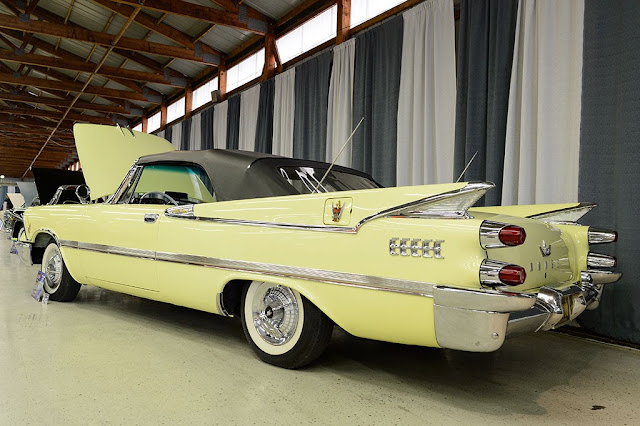 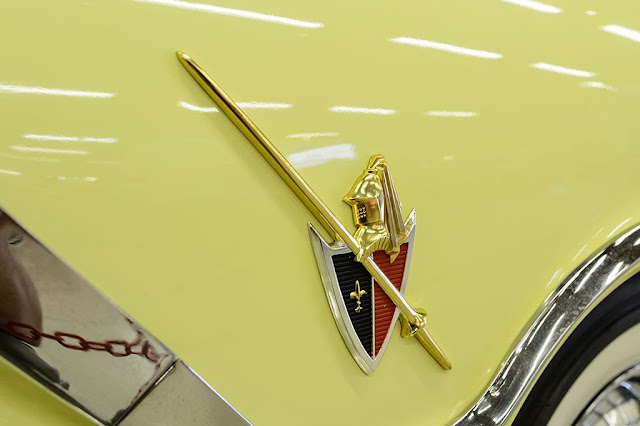 If you wanted a splash of color to liven up the dreary day all you had to do was stare at Dick Burke, Sr.'s brightly hued 1970 Plymouth Duster. 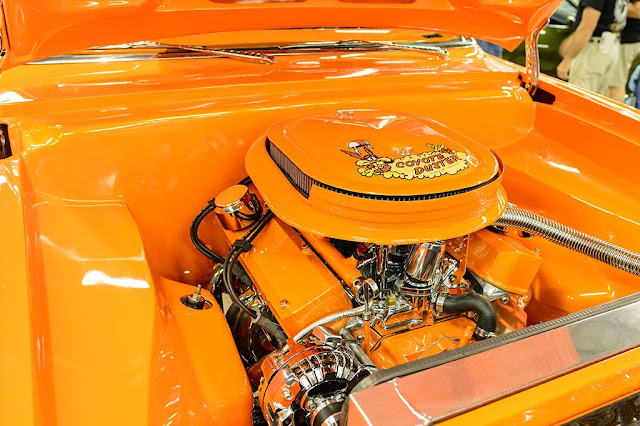 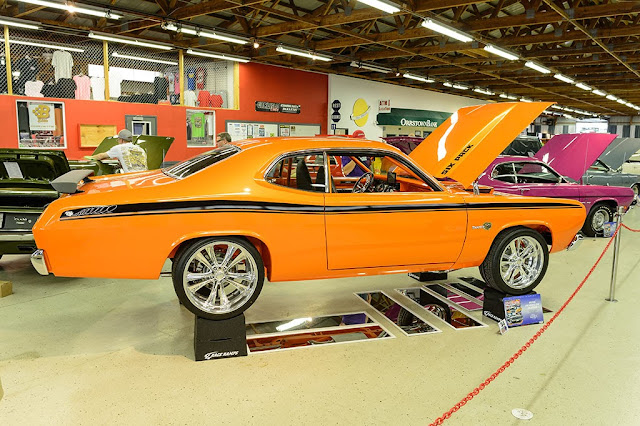 Even the girls drive cool rides in the Mopar world.  There were several cool ride for you to enjoy over in Building Y, which was reserved for "The Woman of Mopar", including Rosie Kossuth's 1964 Dodge Coronet 440 "Lady Max". 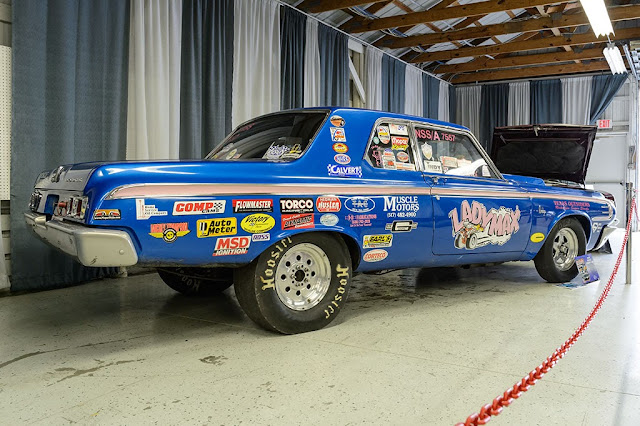 There were plenty of Max Wedge powered muscle cars everywhere. Carlisle grouped a number of them together and called it "The Max Wedge Reunion."  Greeting you at the door of Building G was George and Carol Edwards' 1964 Plymouth Belvedere "The Reverend Mr. Black" powered by a 426 Stage III Max Wedge. This was one of only fifty lightweight factory racers built by Plymouth. 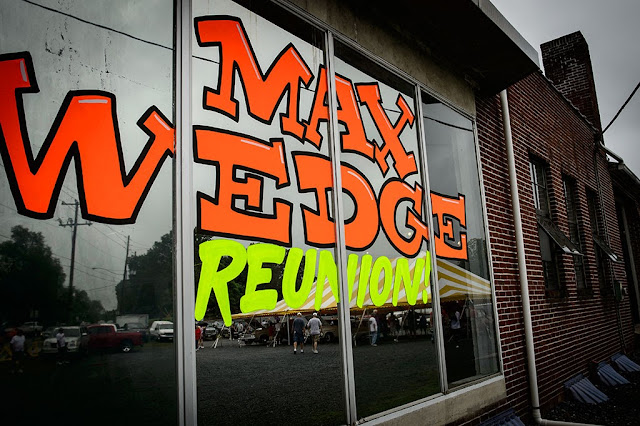 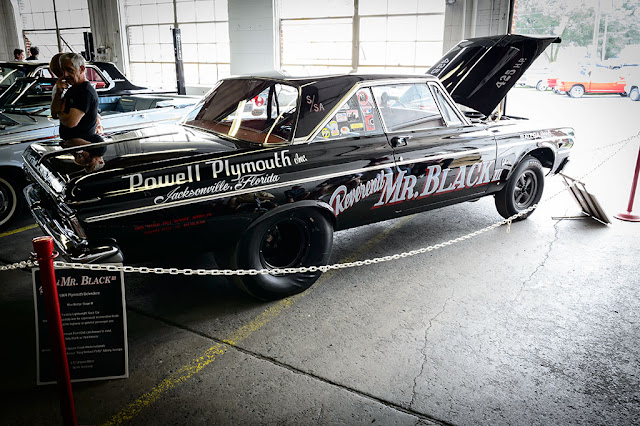 You could see other Max Wedges in the building including Clay Kossuth's 1963 Dodge Coronet 330 and Jeff Barr's 1962 Dodge Dart 440 Max Wedge. 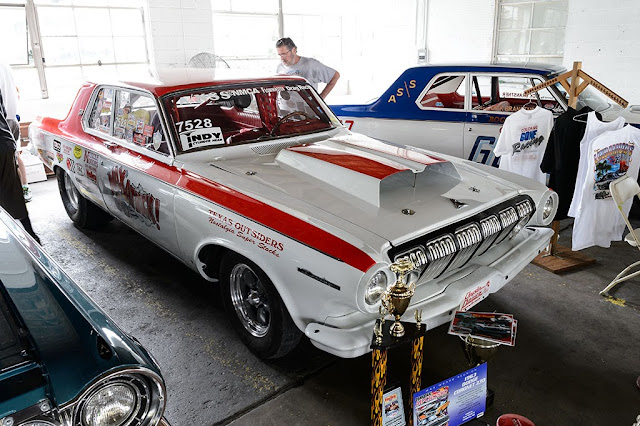 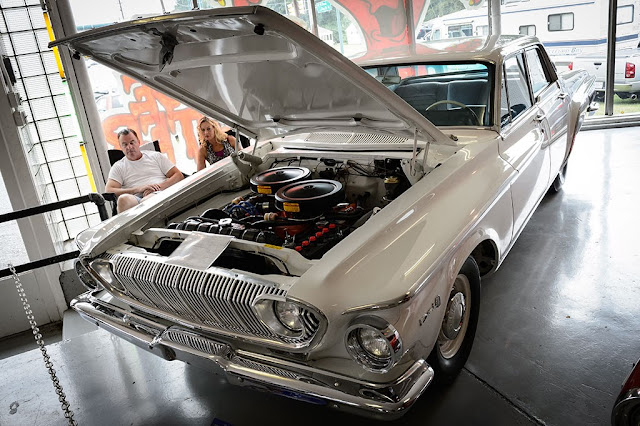 Back outside I was once again chasing big fins. If you like fins then you would have had plenty to choose from at the Carlisle All-Chrysler Nationals. I was especially fond of Snip Reinbold's 1960 Chrysler Windsor. 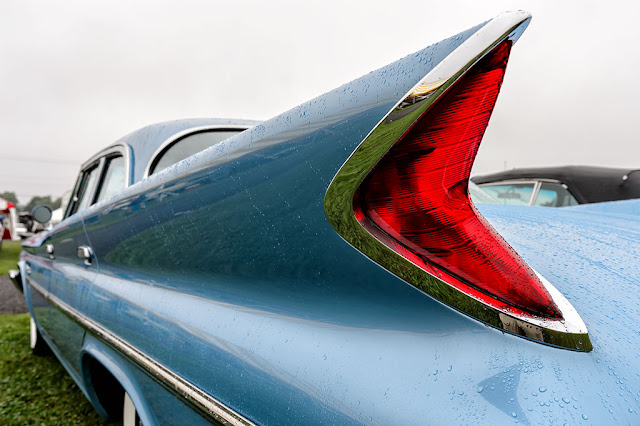 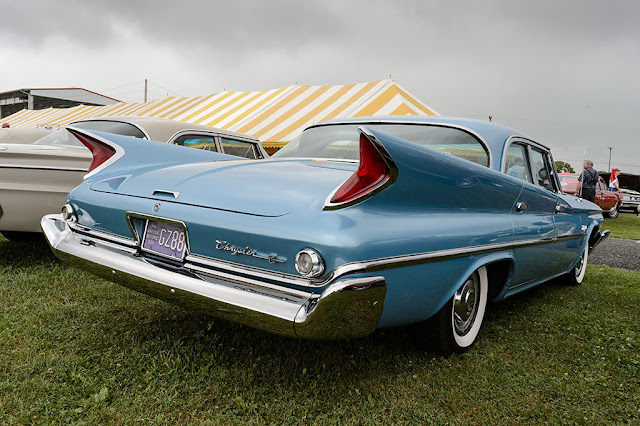 What would a Mopar show be with out the Duke Boys? A couple Hazard County police cars and half a dozen or so General Lees, like Tom Felice's 1969 Dodge Charger, were available on the show field. Earworm alert:  "Just the good ol' boys. Never meaning no harm..." 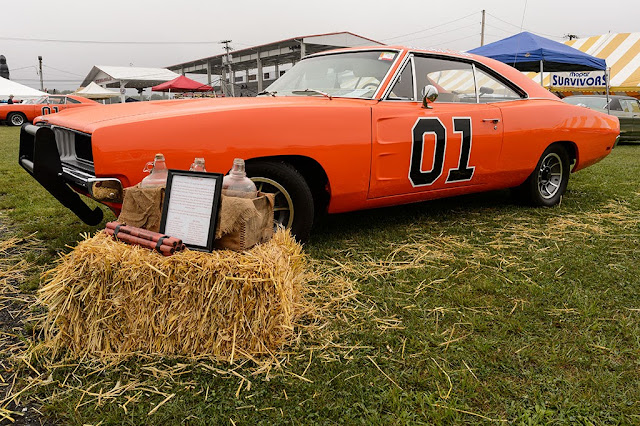 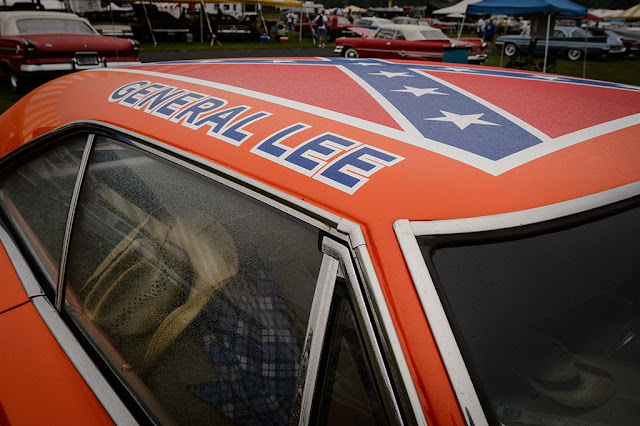 What's all that buzzing? Could it be Andrew Pingyar's 1970 Dodge SuperBee? 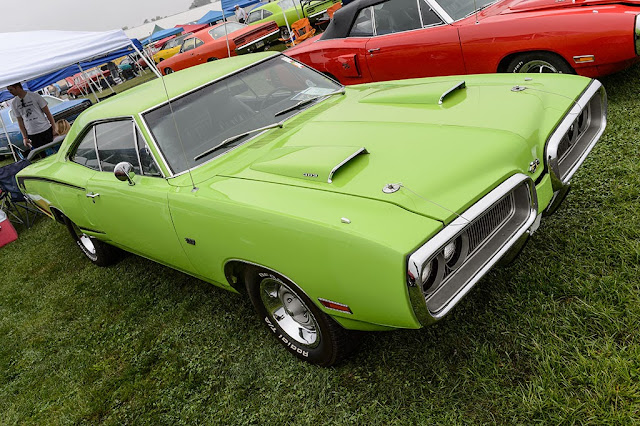 Shopping in the vendors' midway, I found some ideas for Hearsela.  What do you think of the intake on Bob Dahlinger's 572 Hemi which was stuffed into his 1969 Dodge Charger? I think it would go nicely with the theme of the Bubba's Garage hearse! 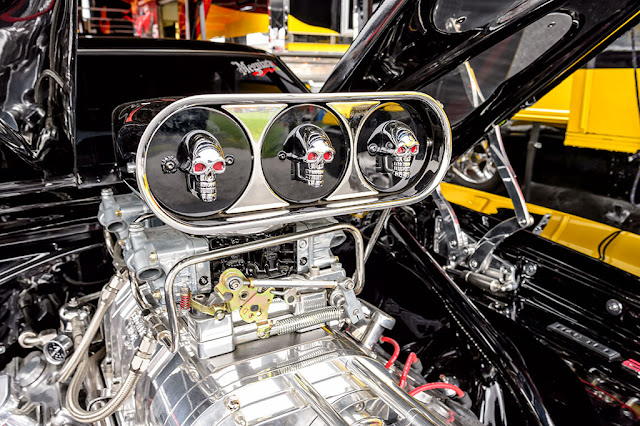 Wow, there were a lot of cars here at the Mopar show. This is a panorama I took early in the morning around 10am.  Already there were plenty of cars here.  And did I say it was raining?

Up the hill I went to see what I could see.  I was rewarded with a sea of Dodge Vipers. Robert Schwarzli was trying to keep his 2002 Dodge Viper dry under a tent.  It wasn't working well. 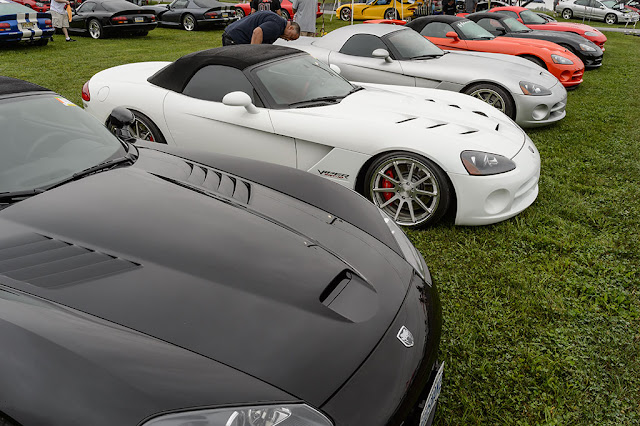 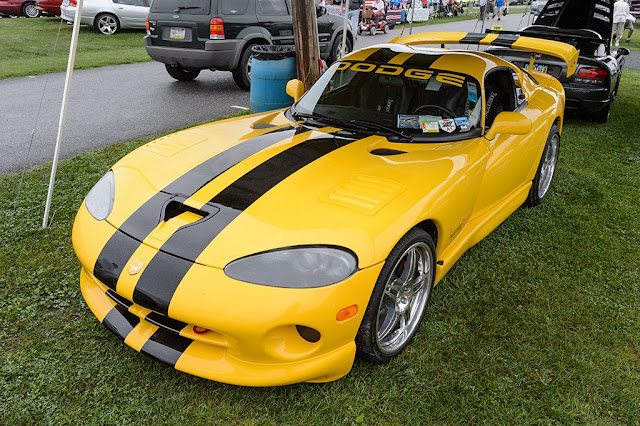 On top of the hill was where you would also find all the trucks. There was a mini gathering of Lil Red Trucks in states from full restorations to "I can't believe that made it here." 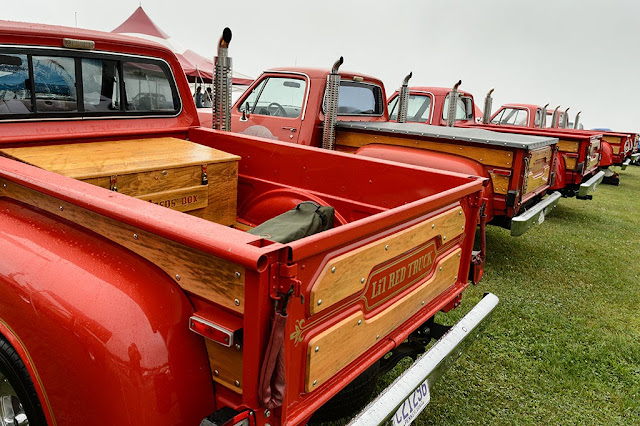 Even though I was pretty drenched by the rain I didn't really notice it.  That's what a good car show can do; make you forget all your troubles. Fantastic people and equally fantastic vehicles made for a great day.

Be sure to check out more of our photos over on our photo website: BG Customs Photography