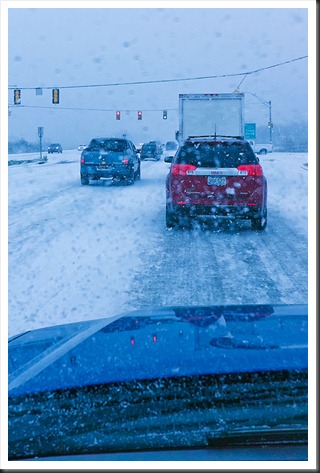 Friday, December 10, 2010 saw the area’s first snow. A small snow squall produced maybe 1/4 inch of the white stuff but you would have thought it was a blizzard by the number of accidents. I was on my way home from an early morning run to Hagerstown Ford for a transmission re-flash in my F-150 when the idiots began wrecking. When the snow started sticking I instinctively reduced my speed and moved over into the right lane but a few individuals, mostly in their high dollar SUVs, continued to fly by us sane folks at 65 mph or faster. It didn’t take long to find one in the ditch. A few minutes later there was a car stuck on an off ramp to Charles Town. Several road closures with more accidents made for an interesting morning. I had to wait for awhile for the scene to clear for an SUV on its side on Rt 340. I slipped only once and I was driving a pick-up truck! Slow down and arrive safe.